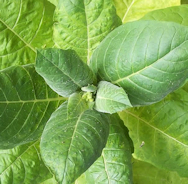 Tobacco is a plant in the nightshade family, native to the Americas. Its allure is in the leaf: an alkaloid pesticide – nicotine – which acts on the mammalian system as a stimulant, and, in high doses, a hallucinogen.

Indigene Americans consumed tobacco as an entheogen: a shamanic substance to contact the spirit world.

Spanish historian Bartolomé de las Casas wrote of how Columbus sent scouts into the interior of Cuba, who found:

men with half-burned wood in their hands and certain herbs to take their smokes; and having lighted one part of it, by the other they suck, absorb, or receive that smoke inside with the breath, by which they become benumbed and almost drunk, and so it is said they do not feel fatigue. These muskets as we will call them, they call tabacos. I knew Spaniards on this island of Española who were accustomed to take it, and being reprimanded for it, by telling them it was a vice, they replied they were unable to cease using it.

Sheared of its spiritual power, the vice of tobacco spread throughout the world. Native Americans knew that if one abuses the plant it abuses them, felling with sickness. Europeans had no such sense of proportion, nor would succeeding generations across the world. So much for social progress.

Time turned tobacco into a poster child for economic dynamics. Tobacco evolved into commercial oligopolies in countries where capitalism festered unfettered. Asian countries were more inclined to societal control, and so created state-owned or controlled tobacco monopolies. It was state sanction of a severe disease-causing agent.

As a valuable agricultural product, tobacco is subsidized by governments throughout the world, including the United States, even as it spends modest amounts of money to curb smoking, in a façade of societal concern.

Peculiarly for a plant that evolved its own pesticide, copious doses of pesticides are applied to tobacco as a commercial crop. Tobacco extracts soil nutrients much more quickly than any other major crop, leading to dependence on fertilizers.

Tobacco companies notoriously fought any revelations of the health harms caused by smoking cigarettes, denying at every step to government officials what they already knew.

The base of our business is the high school student. ~ T.L. Achey, executive at Lorillard Tobacco Company

Meanwhile, slick advertising by tobacco companies aims at impressionable adolescents, attempting to portray smoking as “cool,” and so hook teenagers on a lifelong habit. In short, the tobacco industry flagrantly exemplifies the unconscionable sociopathy that embodies corporate capitalism.

The fragile, developing self-image of the young person needs all the support and enhancement it can get. Smoking may appear to enhance that self-image. ~ R.J. Reynolds tobacco company internal memo

Smoking is impulsive for some young adults. They are acting without a lot of forethought and favor immediate rewards over long-term negative consequences.

As a person ages and continues to smoke, smoking becomes part of a regular behavior pattern and less impulsive. The motives for smoking later in life – habit, craving, loss of control and tolerance – are key elements of smoking dependence and appear to be more independent of personality traits. ~ American psychologist Andrew Littlefield

As any smoker can tell you: nicotine is addictive. It ramps dopamine and activates the brain’s reward regions. Nicotine withdrawal creates craving and impels relapse.

Giving up smoking is the easiest thing in the world. I know because I’ve done it thousands of times. ~ Mark Twain

~20% of the world population – pre-teen children excluded – smokes. 31% of men and 6% of women worldwide light up and drag their health down daily with cigarettes.

Government regulations that limit positive advertising, such as requiring plain packaging on cigarettes, and efforts that publicize tobacco’s health hazards, are effective. Anti-smoking laws in Panama plunged tobacco consumption by 70%.

We don’t smoke that shit. We just sell it. We reserve the right to smoke for the young, the poor, the black, and stupid. ~ R.J. Reynolds executive

Cigarettes are not just rolled tobacco in paper, with a filter stuck on the end to take out some tar. A modern cigarette is a custom-designed nicotine delivery system, backed by decades of research.

Over 600 additives are put in cigarettes. Some are for psychological effect. Menthol adds a smooth minty taste which facilitates habit formation.

Various spices are added for different effects. Cocoa contributes aroma and an impact as a bronchodilator. Cocoa contains theobromine, which helps open the lungs to receive smoke.

Sugars are added to produce a milder, more inhalable smoke, and to boost the addictive potency of smoke. Burning sugar generates acetaldehyde: an airborne carcinogen in cigarette and cannabis smoke.

The most potent kick added to cigarettes is ammonia, which pushes a hot nicotine molecule to a state that amplifies its effect and its addictive power.

Levulinic acid is added to increase the nicotine delivered in smoke, reduce its harshness, and enhance the efficiency of nicotine binding in the brain.

Chemicals are gratuitously added to adjust ash color or the optical qualities of smoke.

Then there are the adulterants. Tobacco production is not an especially sanitary endeavor. In 1994, Philip Morris documented what it found in cigarettes: rubber bands, machine belts and lubricants, glass and plastic fibers, and lots of little creatures – most dead, a few still kicking. Smoking is a filthy habit of a filthy product.

Cigarette smoke paralyzes the cilia on cells in the respiratory tract. The job of cilia is to move mucus up so it can be coughed out. Thus, inhaled smoke compounds the damage by knocking cilia silly.

Some cilia recover when smokers sleep. So, when a smoker wakes, the cilia try again to do their job. The result: a hacking cough in trying to clear junk out of the lungs.

Smoking damages every organ in the body. With its heavy tax on the respiratory, cardiovascular, and immune systems, and its cancer provocation, tobacco is the single strongest cause of preventable death globally.

Regular smokers can expect their lives shortened by a decade or more, with plenty of suffering from health problems in the meantime.

Tobacco smoke wafts, polluting the air around a smoker. This 2nd-hand smoke lets others nearby suffer the detriments of smoking.

2nd-hand smoke terminates 600,000 people worldwide each year. Only 7.4% of the world population live in a non-smoking environment.

The risks of tobacco exposure do not end when a cigarette is extinguished. Non-smokers, especially children, are also at risk through contact with surfaces and dust contaminated with residual smoke gases and particles, the so-called 3rd-hand smoke. ~ English chemist Jacqueline Hamilton

Many of them are manufactured in China. There’s no quality control. ~ American physician Richard Hurt

In the 1st decade of the 21st century, tobacco technology went up in smoke with a new nicotine delivery system. Chinese pharmacist and heavy smoker Hon Lik invented the modern e-cigarette in 2003. Nicotine and flavoring packed in propylene glycol or glycerin is vaporized in a battery-powered stick resembling a cigarette.

As may be expected of a new product, the long-term health consequences of e-cigarettes are uncertain only in comparison to old-style tobacco. E-cigarettes lack the tar found in tobacco cigarettes. This allowed companies to tout this toxic substance as a “safer” alternative to cigarettes.

The edge that e-cigarettes had in lack of regulation allowed them to be aggressively marketed, and quickly become a multi-billion-dollar-a-year market segment. E-cigarettes went unregulated in the US for over a decade. It was only in 2016 that the FDA issued regulations, which most significantly banned sales to minors.

E-cigarettes are regularly inadvertently adulterated with bacterial and fungal toxins that can cause lung disease, among other maladies. Cartridge-based e-cigarettes are more laden with biological menace than liquid products.