Opium teaches only one thing, which is that aside from physical suffering, there is nothing real. ~ French novelist André Malraux 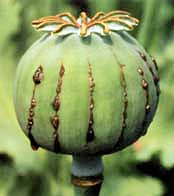 Opium is the dried latex from the opium poppy: an annual herb native to southeastern Europe and western Asia. 12% of an unripe seedpod is morphine, one of 50 different alkaloids produced by the poppy plant. Morphine is the gold standard of analgesics – as good at intense pain relief as can be produced, by plant or man. Opiates also surpass all substances in being addictive. The serene ease of pain leaves one wanting it again and again.

Withdrawal is a mirror opposite: an intense exercise in suffering, both physical and psychological. The body builds tolerance to opiate use, reckoning withdrawal all the more excruciating.

The power of the poppy was discovered by the early Neolithic. It was cultivated early and known to all of the ancient civilizations except China. Arab traders introduced opium to China around 400 ce.

Though the Sumerians referred to opium as the “joy plant” by 3400 bce, opium was mostly medicinal until the 16th century, when Portuguese packed tobacco with opium and smoked it. The Chinese who they traded with them at the time rightly considered it a barbaric practice. That attitude underwent revision as the centuries worn on.

Smoking opium became fashionable in the early 19th century, especially in China, and among artistic types in the decadent West. Opium had been in Chinese medicine chests since the 7th century.

When, in 1839, the Chinese ordered all foreign traders to surrender their opium, the Chinese government’s attempt to suppress opium traffic ran afoul of British interests. The British response was to send warships and fight over the dope.

The First Opium War ended in 1842 with the Chinese paying a large indemnity and ceding Hong Kong to the Brits. European imperialism, finding opium addictive, fought a Second Opium War (1856–1860) with China. The French were in league with the British for this one, with the US joining in for the finale. The outcome was further humiliation to China and indemnity to European powers.

Opiates were legal in the United States until the late 19th century. The federal government did not step in until 1890, when it introduced a tax on morphine and opium. That turned into prohibition of non-medical use in 1909.

One could easily obtain opium in England in the mid-19th century by walking into a chemist’s shop. Britain passed legislation controlling trade in 1868, but it was decades before the law was enforced.

Opium was still legal in England when World War I broke out. The Dangerous Drugs Act of 1920 legally ended recreational opium use in the UK.

While opiate refers to opium products, opioid covers all psychotropic substances that resemble opiates in effect.