Only education is capable of saving our societies from possible collapse, whether violent or gradual. ~ Jean Piaget in 1934

Swiss psychologist and philosopher Jean Piaget (1896–1980) studied cognitive development. Piaget proposed his theories of genetic epistemology – the acquisition of knowledge from infancy onward – in the late 1930s. His ideas were completely out of favor with the behaviorist sentiment that dominated at the time. It was not until the 1960s that Piaget’s ideas gained widespread acceptance. Then his impact led to education reform movements in several countries.

Piaget established constructivism: that knowledge and meaning emanate from interaction between experiences and concepts. Cognitive development is the process of a youngster trying to make sense of the world. Piaget observed that children are little scientists, creating hypotheses to understand their physical and social worlds. These nascent theories undergo confirmation or revision as data pours in from personal experiences.

Piaget considered cognitive development a process of constant updating and revising schemata. Via assimilation new experiences are fit into existing schemas. In accommodation, new information provokes schema revision or creation. The failure of unmet expectations leads to learning via accommodation.

Later researchers found Piaget’s notions of assimilation and accommodation too vague to test empirically. So those concepts, however valid, were largely abandoned in favor of other cognitive processes more amenable to testing. 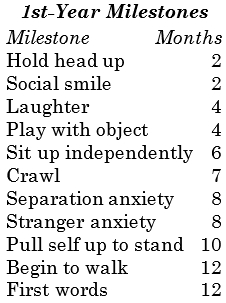 Newborns explore and learn from a precocious knowledge base via innate behaviors. At 3 months, babies are abstracting visual patterns into rules. At ~7 months, they begin tracking other’s mental states. At ~8–9 months, intentional behavior begins. Infants start to comprehend the permanence of objects around this time. Before then, existence is only what can be perceived: out of sight, out of existence.

Piaget underestimated how quickly worldview develops. Well before they are 1 year old, infants have already become active experimenters. Babies are busy getting a grip on the essentials: developing naïve theories of physics (the nature of objects) and biology (inanimate versus animate objects).

Very young children’s learning and thinking are strikingly similar to learning and thinking in science. They test hypotheses against data and make causal inferences; they learn from statistics and informal experimentation, and from watching and listening to others. ~ American psychologist Alison Gopnik

By around 1 year, babies are reasoning deductively, and understanding indirect relations: what is termed transitive inference. An infant is able to deduce which character should dominate another character based upon their interactions with others, even when the 2 characters had not been seen directly interacting with one another. From an evolutionary perspective, understanding social hierarchy is a paramount survival skill.

By 1 year, babies comprehend intention in others. This develops through social interactions involving speech and joint attention to objects, and coincides with better motor skills, including mobility.

The idea of self-concept develops late. We are born assuming a oneness with the world. Duality – distinction between self and an external environment – only gradually dawns.

Just as object permanence and duality are learned, so too that animate objects (beings) have minds of their own. Before then, a baby is egocentric: assuming that others experience the world exactly the same. Attributing inanimate objects with lifelike properties – animism – is also common.

Not until 15–18 months do infants recognize themselves in the mirror. Awareness of oneself as a distinctive being emerges between 18 and 24 months.

Once children fully understand that they exist, they begin to wonder who they are. They want to define themselves. Throughout the preschool years, possessions continue to be one of the ways in which children define themselves. ~ American psychologists Robert Kail & John Cavanaugh

By 18 months, most infants gesture and have begun to talk: evidence of well-developed symbolic thought. Toddlers begin pretend play, imitating understood motions, such as brushing the teeth: another use of symbols. Once symbols are understood, infants begin to anticipate the consequences of actions.

Children’s acquisition of language is fundamental to their discovery of the mind. ~ Janet Astington

Young children recognize animals as alive before they do plants. Regardless of age, lack of apparent movement renders plants 2nd-class life forms in the minds of most people. Associating action and intelligence is one naïve and untrue biology belief that never goes away.

A 3-year-old’s drawing of family members is not drawn to scale, but such accuracy is not yet an issue to them, even though they are aware of the inaccuracy. At this stage, children remain egocentric in typically thinking that others see the world exactly as they do.

The ability to attribute mental states to other individuals is crucial. A milestone of this ability is reached around the age of 4, when children start understanding that others can have false beliefs about the world. ~ German cognitive scientist Charlotte Grosse Wiesmann et al

Understanding that others have minds different from one’s own is termed theory of mind. Children begin to develop theory of mind around age 4, by which time they understand living things well enough not to be fooled by an animated robot, however lifelike. By the time they are 5 or so, children understand that other minds are different than their own and begin to appreciate that what is in the mind is not necessarily what exists in the world.

Social cognition is at the heart of children’s ability to get along with other people and to see things from their point of view. The basis of this crucial ability lies in the development of theory of mind. ~ Janet Wilde Astington & American psychologist Margaret Edward

Once children appreciate theory of mind, they begin to lie more frequently and effectively. Deception is another important social skill.

A child is shown 2 identical beakers with the same amount of juice. The child understands the quantities are the same. Pour the juice from one beaker into another, taller, thinner beaker. The juice level rises higher in the thinner beaker. Even having seen the operation, preoperational children insist that the taller beaker has more juice than the original beaker.

Between the ages of 4–7, serious curiosity sets in. Children begin asking questions, including the ever-vexatious “why?”. During this intuitive substage, as Piaget called it, children realize they have a vast amount of knowledge, but are unaware of how they acquired it.

All the best faculties of a mature human being exist in the child, and that if these faculties are encouraged in youth they will act well and wisely in the adult, but if they are repressed and denied in the child they will stunt and cripple the adult personality. ~ American author Ursula Le Guin

According to Piaget, understanding that others have different viewpoints is a hallmark of the concrete operational stage of development; a continuation of appreciating theory of mind, which culminates in mentalizing: imagining what others are thinking. A somewhat related characteristic is what Piaget termed centration: narrowly focusing on only one aspect of a problem while ignoring other, equally relevant aspects.

In the concrete operational stage, a child shows more logical thinking, with an understanding of causation, size, speed, and numbers. Concepts such as truth or honesty are still beyond description in the abstract, though concrete examples are comprehended.

During this stage, children begin to appreciate conservation: that the essential properties of an object remain despite changes in appearance. Along with conservation comes the understanding of reversibility: that an inanimate object may be changed and returned to its original condition.

A deepening sense that others have different minds takes some of the edge off egoism. This is a major step in developing the concept of give-and-take.

Abstract reasoning is on the upswing from early adolescence, as the cognitive limitations of earlier stages loosen. Teenagers more adroitly grapple with situations realistically, though an appropriate sense of risk only develops in the 3rd decade of life.

A sense of odds develops around the age of 5. Although children over that age are risk-seekers, they feel a loss aversion typical of adults who suffer from framing effects.

Piaget underestimated the mental competence of infants and toddlers and overestimated the cognitive skills of adolescents. He also paid insufficient attention to the impact of emotion, observational learning, verbal instruction, and culture on cognitive development. But the mental development process generally proceeds along the lines that Piaget proposed.