I cannot grasp all that I am. ~ Augustine of Hippo

Individuals vary greatly in their level of self-awareness, which is an intuitive understanding of oneself in light of social interaction. The Johari window illustrates concepts of self-awareness and self-disclosure.

The Johari window is a self-awareness examination heuristic created in 1955 by American psychologists Joseph Luft and Harrington Ingham. This tool is used primarily in self-help and corporate groups. A participant chooses among a list of adjectives which are considered self-descriptive. Peers then choose adjectives from the same list that they think signify the participant. The result is a diagram with 4 panes, indicating information known or not known by oneself and others. 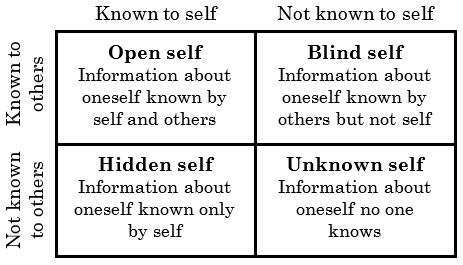 Information that others know about you changes depending upon who you are interacting with. The result is an exposure that is both intentional and unintentional.

Everyone is a moon and has a dark side which he never shows to anybody. ~ Mark Twain

The blind self is the self-awareness blind-spot. This is information others have gleaned about you which you are not aware of.

The 4 Johari selves are an integrated whole: the size of an individual’s inner world through social reflection. Individual Johari selves grow or shrink with emotional and spiritual maturation or regression.

Revealing yourself to others does more than enlarge the open self. Through listening to yourself and insight via reflection, it may also reveal personality facets previously unknown to you, especially with feedback.

You can learn about yourself by listening to others, and by trying to see yourself as others do. Comments that amount to unsolicited advice are especially telling.

To reiterate: the idea of self – looking at one’s mind-body as an object, rather than seeing being as a process – is without benefit but carries a cost. Thinking of oneself as a character lessens fluidity, as one artificially crafts behavior to fit a role rather than spontaneously acting appropriate to the situation.

The act of definition is of delimitation: defining what is not as well as what is. Don’t do that to yourself – you only curtail your own potentialities. Consider instead your learning ability and possibilities arise. Framing matters.