There is no more powerful, pervasive influence on how individuals think and cultures interact than our different perspectives on time: the way we mentally partition time into past, present and future. Every child learns a time perspective appropriate to the values and needs of his society. ~ Alexander Gonzalez & Philip Zimbardo

American corporate culture is fixated on time: building a profitable future. In contrast, those south of the border are more relaxed about time. Their pace of life is more pleasant.

More generally, the root of cultural differences over time owes to different conceptions of how time flows, and its treatment. 2 spectral ends are monochronic and polychronic time. 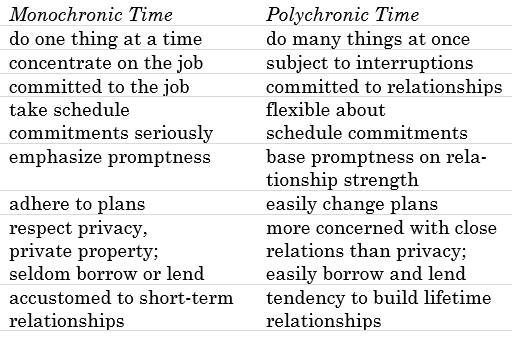 In monochronic cultures, time is viewed as linear and divisible. Monochronic time is considered almost tangible.

Monochronic people talk about time as if it was money: something that can be “spent,” “saved,” “wasted,” and “lost.” Monochronic time is an unnatural cultural perspective which must be learned, as it violates the natural rhythms of biology and sociality.

The blindness of the monochronic organization is to the humanity of its members. ~ American anthropologist Edward Hall

In contrast, polychronic time is socially oriented: people take precedence over appointments. Polychronicity prioritizes completing social events, such as conversations, over adhering to a schedule.

Clocks slay time. Time is dead as long as it is being clicked off by little wheels; only when the clock stops does time come to life. ~ American writer William Faulkner

Interpersonal information flow is much higher in polychronic cultures than in monochronic ones. Meetings occur to create consensus. Most attendees, if not all, know beforehand what will be discussed.

Polychronic people consider rigid meeting agendas an encumbrance, even an insult to one’s intelligence. Obtaining consensus and running a meeting like a production line are antithetic goals.

The French, Mediterranean, Arab, and Latin cultures are polychronic. The Japanese are inclined to polychronic life but have monochronic workplace tendencies which were adopted from Western industrial culture.

Time has everything to do not only with how a culture develops, but also with how the people of that culture experience the world. ~ Edward Hall

American women are more prone to depression than men, as are those living in America that come from cultures which emphasize social bonds over material gains. This is often the case among black Americans and Hispanics. Monochronic time contributes to the problem.

While men are more task-oriented, a woman’s natural inclination is to sociability. The American monochronic capitalist culture, with its demands at work and high employment turnover, is at odds with a life of caring relationships and lasting bonds.

The pursuit of wealth impoverishes quality of life. Worry about the future digs an early grave.

Life is long if you know how to use time. ~ Seneca