Gestalt theorists were fond of optical illusions, as they illustrate the flexibility of perception. 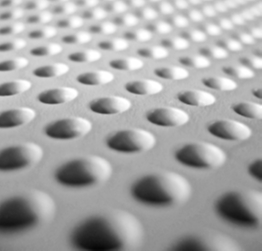 The figure at right exemplifies how we can see something that is not really there: proving the point that perception is a fabrication rather than a replication of actuality. The rounded dots may be seen as either convex (buttons) or concave (holes), but not both at the same time. To perceptively switch between the two you have to first look at something other than the dots.

The foregoing figure also illustrates multi-stability in perception. Multi-stable perception is the tendency to alternate between interpretations when a perceived object offers ambiguity.

Cinema is the best example of the phi phenomenon. Movies rely upon persistence of vision: that a visual perception briefly lingers after its disappearance. These visual artifacts are due to the human optic nerve having a response time of 10 cycles per second and visual memory correspondingly compensating. The phi phenomenon works with image series faster than that.

Though various frame rates had historically been used in silent films, the movie industry settled on a standard 24 frames per second (fps) by 1930. The human ear is more sensitive to changes in audio frequency than visual fps. Once talking pictures became the norm, film speed variations became intolerable.