People are motivated to reserve the ‘uniquely human’ essence for in-groups and to withhold it from out-groups. ~ American social psychologist Amy Cuddy et al

As with all things, people view groups in terms of affinity or rejection. Those groups which an individual identifies with is an in-group. Conversely, an out-group is one whose existence is considered objectionable.

A reference-group is one which serves as a basis for self-evaluation. Reference groups are in-groups with imagined admirable attributes.

A reference-group may be either primary or secondary, or even those with which one has only secondhand information about. That reference-groups are common illustrates the universal tendency of people to question their own self-esteem and suffer attribution biases.

When others are perceived as being like oneself, such as when among those in an in-group, mentalizing is easier and considered more accurate. By this, others are regarded as reliable, yielding a sense of self-comfort which internally strengthens emotional bonding.

When perceivers assume an initial general sense of similarity to a target, they engage in greater projection and less stereotyping. ~ American social psychologist Daniel Ames

The opposite dynamic occurs in the presence of out-group members. Uncertainty remains unresolved, as one lacks the assurance of predictability that ready mind perception provides. This unease may stimulate fear and animosity.

Prejudices toward in-groups and against out-groups is universal, appearing in children by age 6. Individuals consider in-groups more positively, while out-groups are vilified. This generalizing tendency is termed attribution bias.

Attributions of in-groups and out-groups begins early: 6-month-old infants favor faces of the same race with which they are already acquainted.

Our minds retrieve race because it predicts alliances in our social world. When other cues predict cooperative alliances better, the mind reduces its reliance on racial categories. ~ Leda Cosmides

That perceptual biases of categorization lay at the root of prejudice was recognized by Polish social psychologist Henri Tajfel in 1979. His insight went against the prevailing view of psychologists at the time, who assumed that prejudice was a byproduct of personality.

Our species is profoundly coalitional, and in most times and places moral prescriptions apply only to one’s in-group, not to humanity in general. I don’t see any evidence that we evolved innate, universal moral rules about how to treat all humans. That’s why history, as James Joyce said, is a nightmare. Prehistory is worse. ~ American anthropologist Don Symons

Members of out-groups can often be represented as animals, both through spoken metaphors and through artistic depictions. ~ Nicholas Epley & Adam Waytz

In the fascist style of politics, one of the crucial elements is distinguishing ‘us’ from ‘them’. We are intrinsically good; they are intrinsically bad, defective, subhuman, et cetera. ~ English philosopher David Livingstone Smith 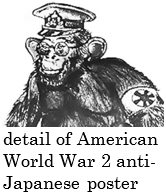 Attributed negative behaviors of out-group members are thought to owe to inherent personality flaws, whereas observed positive behaviors are flukes. Conversely, the goodness of in-group members is taken for granted, while objectionable acts by in-group individuals are overlooked or explained away as misunderstanding or lapses of judgment.

Group affect can form a gyre of intergroup alienation, leading to hostility. In-group interactions may exaggerate the belief that one’s own group is disliked by another. This diminishes the likelihood of intergroup relations, increases defensiveness once in an interaction, and thereby tends to confirm the earlier mistaken assumption.

Typical attribution errors include misperceptions between racial groups and also between men and women.

A related phenomenon has been seen in men’s perceptions of women coworkers. Meticulous behavior in a man is perceived positively and is seen by the man as “thorough”; in a woman, the exact same behavior is perceived negatively and is considered “picky.” Behavior applauded in a man as “aggressive” is condemned in a woman exhibiting the same behavior as “pushy” or “bitchy.” ~ Margaret Anderson & Howard Taylor

The male drive for dominance is particularly strong against members of out-groups, who are viewed as competitors.