There are 2 distinguishable agencies from which thoughts arise. One, willmind, is the imminently useful tool which is esteemed as mental acumen. The other, nattermind, is a nuisance disguised as a personal guide.

As the vehicle of comprehension and problem-solving, willmind is mental power under supposed volition. Willmind is at work while concentrating on the environment in the moment or at a task at hand. In translating mental intent, willmind affords the generation of expressive communication. 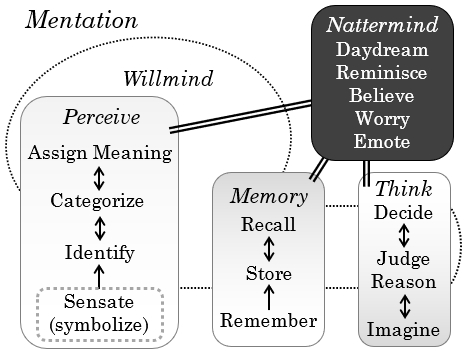 Nattermind is the woodpecker on the lumber of mentation. It is the voice of distraction, doubt, and distress: a deceiver by its nagging worries and schemes.

Nattermind binds awareness to the mind-body. In doing so, nattermind creates the duplicity of duality: that one is an individual self in a physical world. This is nattermind’s ultimate intent: to create the illusion of self and duality so as to rule over its subject.

The world is vast and strange, but no vaster and no stranger than our minds are. ~ Ursula Le Guin

Nattermind is a restless beast, itself relentlessly seeking entertainment in the form of speculation. In most people, nattermind constantly attempts to intrude into awareness with its prattle. Worry is nattermind’s favorite pastime.

The mind is its own place, and in itself can make a heaven of hell, a hell of heaven. ~ English poet John Milton in Paradise Lost (1667)

Nattermind’s incessancy is troubling for 95% of the population. Most people are discomforted in sitting idle, letting their own minds prey upon them.

We lack a comfort in just being alone with our thoughts. We’re constantly looking to the external world for some sort of entertainment. ~ American psychologist Malia Mason

Nattermind and willmind point out the manifold nature of the mind as receiver, deceiver, and deliverer. In ignorance the mind is given free rein. By contrast, the road to enlightenment is a discipline: consigning the mind to a mere utility by banishing nattermind.