Go is to Western chess as philosophy is to double entry accounting. ~ American novelist Trevanian in the novel Shibumi (1979) 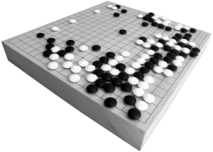 Go is the world’s oldest board game, invented 4,000–2,500 years ago in China. Go has long been popular and respected as an intellectual art form throughout East Asia, notably China, Japan, and Korea. There are over 40 million Go players worldwide.

A Go game begins with the board vacant. 2 players alternate placing black and white stones on the intersections, eventually forming groups of stones that create patterns delineating territory of empty intersections (spaces).

At the end of the game, each space under control of a player is counted as a point. The player with the most points wins.

Stones connect – horizontally and vertically, but not diagonally – to form groups. Any stone or group that is completely surrounded by enemy stones becomes captured: taken off the board, and at the conclusion of the game reducing the point count of the player whose stones they are.

Stones in captive groups not completely surrounded – dead stones – end up counting as 2 points: 1 for the space the stone sits on, and 1 for the captured stone, which hypothetically fills in an empty space on the territory of the player whose stone it is.

A group with a single eye (empty space), or which can be reduced to a single eye, can be captured by being surrounded externally, and then the single eye filled in to capture. Thus a group with no eyes or 1 eye can be killed.

In contrast, a group with at least 2 eyes is alive, and cannot be killed, as it can never be surrounded and captured as a 1-eyed group can. At the end of a game, territory is delineated by groups which cannot be reduced from having 2 or more eyes.

Despite simple rules, Go is a strategy game with a vast number of permutations: 10761 compared to 10120 in chess.

The apprehension of Go is a language and learns like one. Its patterns are like sentences, subject to syntax for forming live – grammatically-correct – groups.

The vocabulary of formations that may arise and give a roughly equal result in the corners to secure territory, and influence play across the board – joseki – number some 3,500.

Similarly, there is surprising complexity in the potential life or death of groups, with especially adroit plays (tesuji) to effect and outcome. The shapes which define life-or-death situations number in the hundreds.

Go players are ranked according to skill. 45 different ranks are recognized, from rank beginner (30-kyu) to top-level professional (9-dan). (Go ranks ascend from 30-kyu to 1-kyu amateur, then 1-dan to 6-dan amateur. A 6-dan amateur is one step away from 1-dan professional. Professional rankings are 1-dan to 9-dan.) The difference between ranks is modest but discernible, equivalent to an extra (free) play on the board at the beginning of the game.

Historically, there have been professionals at the top (9-dan) level so strong that their potency against other players is estimated to have been up to 3 hypothetical ranks better (12-dan).

Go is played professionally in the East Asian countries where it is most popular, and the mental acumen required for skill in the game highly respected.

A child must begin playing Go early to have any chance of becoming a top professional. An ideal age to begin is 4–5 years. Even a 10-year-old novice is unlikely to become fluent enough to be able to go pro in Go.

The subtleties of this game are beyond the reach of the lazy, its triumph is too exquisite for the vulgar and materialistic man. ~ English diplomat and sinologist Herbert Giles