It is the civilized world’s facility with manipulating the representations of reality provided by numbers that has led to such awesome material progress in the past few centuries. ~ English statistician David Hand

It took mathematicians quite a while to accept negative numbers. The Greeks, so interested in geometry, had no need for negatives.

Prime numbers have long been a fascination for mathematicians. Many questions about them remain open. One of the oldest and best-known issues is Goldbach’s conjecture: that every even number greater than 2 can be expressed as the sum of 2 primes. (Goldbach’s conjecture arose from an aside that German mathematician Christian Goldbach wrote in a letter to Leonhard Euler on 7 June 1742.) Generally assumed to be true, and shown so far to 4 × 1018, the conjecture remains unproven despite strenuous effort.

A real number that is not rational is irrational (e.g. √2, which equals 1.41421356…). An irrational number has decimal representations which are neither terminating nor repeating.

An algebraic number is one that can be expressed as the root of a non-zero polynomial with 1 variable and rational coefficients. (It is easier to understand that algebraic numbers are real numbers that are not transcendental.)

In the above expression, x and y are variables (aka indeterminates): the letters represent numbers which may vary in value. A variable is a placeholder in a mathematical formula. A number before a variable is a coefficient, which stands ready to multiply whatever value a variable takes.

There are specific naming conventions for variables in the different branches of mathematics. For instance, the axes of 3d coordinate space are always x, y, and z.

An exponent signifies multiplication to a certain power (number of times). For example:

The irrational, real, or complex numbers that are not algebraic are transcendental. Transcendentals are numbers with decimal quantities that go on and on without repeating.

π and e are the best-known transcendental numbers. 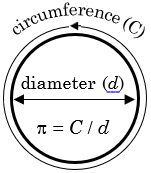 e (2.71828…) is the base of the natural logarithm, which is a logarithm with e as its base. In other words, the natural log is the inverse of e. Practically, e is about time under continuous growth.

The miraculous powers of modern calculation are due to three inventions: the Arabic notation, decimal fractions, and logarithms. ~ American mathematics historian Florian Cajori

A logarithm is the exponent of the power to which a base number must be raised to equal a given number. The 2 equations below are equivalent.

The natural log – written loge or ln (from the Latin logarithmus naturali) – gives the time needed to reach a certain level of growth, given constant growth.

With g as growth (at a 100% compound growth rate) and d as duration:

ex is a scaling factor: the amount of continuous growth after a certain (x) duration. The inverse – ln(x) – is the duration needed to reach a certain level of growth.

Suppose we want to know how long a wait for a 30-times growth at a growth rate of 5% per period. 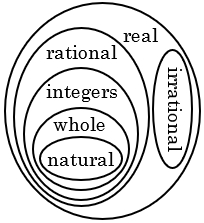 The sets that comprise the all-encompassing real numbers form a nested hierarchy, with a bifurcation at the top between rational and irrational numbers. One oddity is the set of algebraic numbers, which includes all rational numbers but also selectively some irrational ones.

Materialism drove mathematics. The earliest and essential need for math was accounting of property: both quantities of goods and tracts of land. Thus arose arithmetic and geometry.