The hardest arithmetic to master is that which enables us to count our blessings. ~ American moral and social philosopher Eric Hoffer 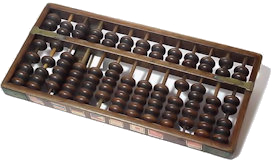 The ancient Sumerians, Egyptians, and Babylonians took some of the tedium out of their calculations with the abacus, which was invented in Sumer ~2700 BCE. The Babylonians advanced computation from Egyptian times partly by their sexagesimal system.

5th-century-bce Greek historian Herodotus noted that the ancient Egyptians had calculated with pebbles. Such counters continued into Roman times. The word calculate derives from the Latin calculus, which means pebble.

Division sometimes creates remainders, which begat fractions. Fractions are a natural outgrowth of practical arithmetic in treating portions of a whole.

Over the centuries, mathematicians came to eschew this pragmatic view of fractions. Fractions became abstract symbols, governed by definite rules which bound them to whole numbers. Nonetheless, fractions ushered in a whole new level of complexity: by emphasizing the ordinal nature of numbers as contrasted to their cardinal or quantitative property. As points on a line, ordinal numbers, and particularly fractions, provided a bridge between arithmetic and geometry by presenting an infinite set of points.