There are 3 kinds of lies: lies, damned lies, and statistics. ~ American author and humorist Mark Twain

Death inspired the science of statistics. King Henry VII’s fear of the Black Plague probably prompted his publishing reports on deaths, beginning in 1532. Mortuary tables started ~1662 with the work of English demographer John Graunt, who saw patterns in the statistics. This was followed by English polymath Edmund Halley, who published an article on life annuities in 1693, thus providing the mathematical grounding for insurance via actuarial science.

Probability tells the likelihood of an event. A graph may be made by collating sample outcomes. This results in a probability curve. Carl Friedrich Gauss derived an equation for the probability curve and analyzed its properties.

In 1749, German philosopher Gottfried Achenwall quantitatively characterized government statistical data and coined the term statistic. It had been called political arithmetic in England.

A bell-curve figure shows an idealized symmetrical probability curve with a normal distribution: a continuous probability spread. The mean (median) is its apex, which is the peak number of occurrences, and therefore the most likely point (expected value). 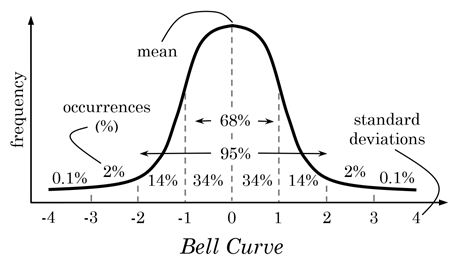 Less likely are events to the left and right, which are respectively fewer and more of whatever is being measured in a sample than those at the median.

The central limit theorem is the term used for the statistical assumption that a large number of independent events will be normally distributed. Logically it is a flagrant fallacy to blithely apply to specific instances in the present what has been generally found in the past. Nevertheless, assumed continuity is a central tenet of statistics.

In charting statistics, such as a mortuary table, the shape of a probability curve may be skewed. In the exemplary curve, illustrating age of death, demise is spread over a greater range before reaching the midpoint, after which folks start dropping like flies.

The standard deviation is a reliable measure of dispersion. ~ American mathematician Thomas Pirnot

Descriptive statistics is the discipline of quantifying a sample, which is a set of collated data. In contrast, inferential statistics draws predictive conclusions from statistical information about the population that is sampled.

Inferential statistics is used to test hypotheses, and to forecast via sample data. As such, statistical inference from a random sample has a confidence interval: the probability percentage that a certain event will occur, or data not sampled, or found in the future, will correspond to an asserted characterization. In other words, a confidence interval is a range of values indicating the uncertainty surrounding an estimate. Confidence intervals represent how “good” an estimate is.

Confidence intervals are given in the form of estimate ± margin of error, where estimate is the measure (the center of the interval) of the unknown population parameter being surveyed for, and margin of error is the potentiality of the estimate being erroneous.

Confidence intervals were introduced into statistics by Polish mathematician and statistician Jerzy Neyman in 1937.

Children are taught the mathematics of certainty: algebra, trigonometry, geometry and the like. That’s beautiful but often useless. We should be taught uncertainty. ~ German psychologist Gerd Gigerenzer

Statistics is difficult for many because it is an obtuse abstraction. The mind is naturally inclined to think in terms of outcomes having causes.

Probability is relatively easy because it is in the realm of causality: how likely an event is. Even babies detect patterns that form the base of probability.

Correlation doesn’t tell you anything about causation, but it’s a mistake even researchers make. ~ American statistician and psychologist Rand Wilcox

Statistics is essentially acausal, which is a paradigmatic shift that has no everyday application. The very concept of statistics is a significant step away from how mind appreciates the world.

The closest statistics comes to everyday application is averaging. The mind can rather readily suss the average of a tangible set of something (e.g., how big the average orange is of 4 sitting there). But how representative a sample is of a larger, unseen population, seriously stretches the imagination; and how confident one should be about the randomness or representativeness of such a sample is a mathematical chimera.

The difficulty is with distributions, which are crucial to understanding statistical reasoning. The idea that individual phenomena can be independently distributed is comprehensible, but that the “distribution” of a large collection of random events can be mathematically characterized with regularity is at best a mystery wrapped in an enigma.

A common misunderstanding of independence and distribution is exemplified by a statement about coin tossing: “if 10 heads have been thrown in a row, the next few tosses have to be tails for the results to represent the distribution.” (There is no statistical population distribution of coin tosses, as each toss is independent. The stated confusion about distribution is with probability distribution (aka odds), which for tossing coins is 0.5.)