A philosophic confection, what intelligence is has been sliced and diced innumerable ways since prehistoric times.

Empirical urges led to the development of tests to quantify intelligence. Francis Galton obliged his itch with a series of tests skewed to physiology, such as being able to discern slight differences in weights. They were useless. The failure of Galton to assess intelligence discredited the psychophysiological approach.

French psychologists Alfred Binet and Théodore Simon invented the first practical intelligence test in 1903, geared to academic studies. Their goal was to identify students needing help in coping with school.

Binet thought that good judgment was key to intelligence, not psychophysical acuity. He sought to suss a child’s mental age: the average intelligence at a certain age. This proved inapt, especially in comparing children at different chronological ages. Yet the notion persisted. German psychologist and philosopher William Stern suggested using an intelligence quotient (IQ): the ratio of mental age (MA) divided by physical age (PA) multiplied by 100. A person with an MA = PA has an IQ of 100. If a person’s MA exceeds PA, their IQ is over 100. This proved absurd, especially past adolescence, as mental age ceases to advance as time takes its toll. 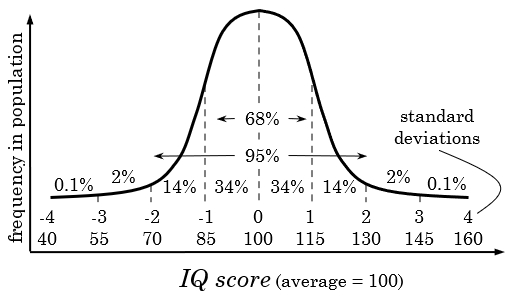 The score of 100 for median intelligence is still used, with increments away from average as standard deviations for higher or lower scores. The figure shown is an idealized bell-curve depiction, not reflecting actual results.

IQ scores have been dropping in industrialized nations since 1950, from an average of 92 to 84. The countries with the highest IQs – hitting up to 107 as a median – are those in east Asia, including Hong Kong, Japan, South Korea, and Taiwan. African countries have the lowest scores, dipping down to the 60s.

Cultural bias in IQ tests has long been a controversy. IQ tests invariably presuppose language fluency which influences the results; but then, language is one of the easiest things to test.

While helpful in the way that Binet conceived – to get an idea of which students may need assistance – IQ tests do not assess how intelligent someone is in a real-world sense, where social skills weigh in, or even in problem-solving when time is not a pressure, or where creativity is called for.

What intelligence boils down to is the ability to adaptively survive. This involves execution of goals.

The mind deals with a multitude of multifarious perceptions and symbols. The ability to do so exceptionally well in a specific area is termed talent.

As there many talents, so too there are numerous facets of intelligence. A good way to think about those facets is to consider the different types of talents that people have, such as precise movement through space (e.g., dance), spatial acuity (e.g., maps for navigation), graphic arts, music, controlled emotive expression (acting), language eloquence, symbolic abstraction (mathematics), logical analysis, organization, problem-solving, creativity, and sociability.

American developmental psychologist Howard Gardner proposed multiple, relatively independent, modes of intelligence; an overstatement to the extent that it obscures that the mind is an integrated instrument, albeit with different aptitudes and deficiencies.

The talents of the mind are at the mercy of emotion, which can elevate or depress the exercise of any skill or acumen. Emotional intelligence is the ability to monitor, contemplate, and manage emotions. The epitome of emotional intelligence is the practice of not indulging emotions. Emotional logic aims at making rational decisions while considering emotional outcomes.