According to the theory of “visual rightness,” a masterwork is perceived as aesthetically appealing because its figurative structure represents the optimal arrangement of its visual features. ~ Malaysian psychologist Viren Swami & English psychologist Adrian Furnham

While symmetry has a strong aesthetic appeal, it is subsumed within the nebulous concept of balance.

Asymmetry is found alluring in masterful artworks, and can be even more pleasing than simple symmetry, as it presents a pleasurable challenge to the mind. The signature traditional Japanese aesthetic is largely founded upon balanced asymmetry. The painting of Mount Fuji from which a dragon rises, by 19th-century painter Katsushika Hokusai, illustrates.

Beginning in 1919, Dutch painter Piet Mondrian  evolved an abstract form which he termed neoplasticism. This consisted of a white ground upon which were painted an asymmetrical grid of vertical and horizontal lines, with areas populated by the 3 primary colors. 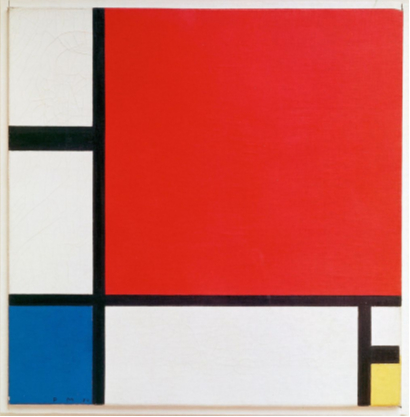