Is IBM just another stodgy company? ~ BusinessWeek in 1979 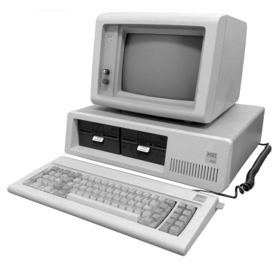 The spurious antitrust suit against IBM took its toll on the company. With its management defensive, IBM’s share of the overall computer market declined from 60% in 1970 to 32% in 1980.

IBM missed the minicomputer market during the 1970s; the niche that DEC created and came to dominate.

By 1980, the personal computer industry was vibrant, with the likes of the Apple II, Commodore PET, Atari, Radio Shack’s TRS-80, and various computers running the CP/M operating system (OS).

In developing its PC, IBM made some radical departures from its typical way of doing business. Most fatefully, it used commercial off-the-shelf parts. This meant that other companies could create clones.

IBM choose the 8088 processor over the superior 8086 because Intel offered a better price and could provide greater volume.

IBM also outsourced the operating system. Under the contract between IBM and Microsoft, the OS provider, this guaranteed that there would be clones, as Microsoft could license its operating system to others. From the get-go, Bill Gates was determined to make MS-DOS an industry standard.

It took a skunkworks division in Boca Raton, Florida only 1 year to develop the IBM PC, which was publicly announced 12 August 1981. The low-end configuration was offered at $1,565 ($4,806 in 2015 dollars). The pricing made it clear that IBM was aiming at the Apple II: and it hit the bullseye. The IBM PC was immediately successful: welcomed into businesses everywhere, as it had the IBM imprimatur – so much so that by 1984, Apple could allude to Orwell and everyone knew whom the reference was to.

The success of the IBM PC hatched an innumerable number of clones. This made the PC an industry standard: something which delivered dominance to Microsoft while eventually denying it to IBM.

In 2004, IBM sold its PC business to Lenovo, a Chinese company. By 2015 IBM had divested itself of computer hardware manufacture, having positioned its diminished self as a software services company; though, thanks to its historic brand name, more than just one in the crowd.