Everything has a price. ~ Paul Samuelson

In market-based economies, price acts as an incentive to potential suppliers: either prompting production of a good or stifling its manufacture, depending upon whether the present price offers the prospect of profit. The basic idea is that more of a good might be had if it has a higher price.

Economists refer to a product as a good, which by definition places a positive value judgment toward all material things consumed. No one worships mammon more than an economist.

The notion that price positively affects supply may be plotted on a chart, with quantity laid out horizontally while price rises up the vertical axis. A supply schedule slants upward: the higher the price, the more of the good will be made available.

Once the means of production are set in place, companies may produce more goods even if the price falls, especially when the current price is still above cost. The fond hope behind that is that the goods made will be sold at a profit.

Oversupply is a habitual problem in modern market economies. Falling prices may provide an opportunity for a dominant supplier to drive weaker competitors out of the market by bankrupting them.

In the instance of monopoly, there is no supply curve: a monopolist seller sets price as it sees fit. The idea of a supply curve is also a sham with an oligopoly, where a few firms can easily collude to set prices.

More generally, the supply schedule critically depends upon market conditions: specifically, that the industry is in perfect competition, where firms cannot influence the price at which they sell, but instead must take price as given. All firms are assumed to produce a homogeneous product, such that consumer brand loyalty should not exist. Every regular shopper knows this is not true.

Throughout the analysis of perfect competition, the assumption is made that the perfectly competitive firm is so small, relative to the overall market, that its impact on the market can be treated as zero. ~ Steve Keen

Unless there is perfect competition and sellers have complete information, which is another fictional ideal, the shape of a supply schedule supposedly acting to efficiently allocate resources is hypothetical hooey.

Unless perfect competition rules, there is no supply curve. ~ Steve Keen

There are many reasons that supply may be insensitive to price for sustained periods: the nature of the good, such as whether it is subject to spoilage or is otherwise available for limited times; production parameters, such as how much capital is involved in its production (sunk cost) or the availability of labor; and market conditions, most notably the current dynamic of competition among suppliers.

Buttressing the notion of a supply schedule is the concept of marginal cost: what it takes to make more.

Cost is the starting point for a supplier determining the price at which a good can be profitably sold. Cost includes design, manufacture, packaging, marketing, and distribution: the total outlay of capital, materials, and labor involved in making a product and presenting it to a potential consumer.

Under the unrealistic assumption of perfect competition, supply of a good in the market is hypothetically determined by marginal cost. The canonical assumption is that firms willingly produce extra output as long as the saleable price of a good is more than the cost to make an extra unit.

Neoclassical theory posits that the marginal cost curve slopes upwards, as productivity presumably falls as output rises: a higher price has to be offered to entice firms to produce more. Though this may sound plausible, an upward-sloping marginal cost curve has no factual basis. When this concept of marginal cost was put before those who do know how factories are designed and managed, they rejected the theory as “the product of the itching imaginations of uninformed and inexperienced armchair theorizers.”

(One of the more peculiar aspects of modern life is that most people have no idea how the commodities they consume are produced. Only a small and decreasing number of workers are directly involved in production, and only a few of those know how factories are managed and designed. In contrast to consumption, which is rather obvious, the conditions of production are a mystery. This ignorance applies to economists.)

Engineers purposely design factories with significant excess capacity, to avoid the very problem that economists assume forces rising production costs. Only goods that are not produced in factories, such as oil, might have short-term production costs as economists expect.

Neoclassical economic theory was formulated in an earlier age, when the dynamics of scarcity and scale were different. What might have applied to piecemeal production has no relation to modern mass manufacture.

The upshot is that production costs are normally either constant or falling for the vast majority of manufactured goods. Hence, marginal cost curves are flat or even falling: the economic advantage of dealing of in bulk. This causes manufacturers no difficulty, but give economists conniptions, since their theories depend upon an upward-sloping supply schedule. 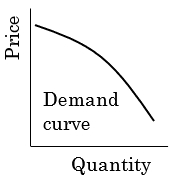 A demand curve runs contrary to a supply schedule. Few consumers are willing to buy high-priced goods. As the price drops, more purchases will supposedly be made: hence, a demand curve is drawn as downward sloping.

There are many instances where demand curves are upward sloping. More stocks are bought when their prices are going up. This same principle applies to all products which can cause bubbles, whether gold or tulips or houses.

Price is a signal that shapes expectations. Demand goes up if consumers expect price rises to continue, thus creating a self-fulfilling dynamic. Any good that can be resold may prompt more demand as its price goes up, as buyers anticipate selling later at a higher price (and thereby reaping a profit). This social psychology is the root of the speculative buying which has propelled many boom/bust cycles.

Some goods are necessities which are bought regardless of price. Demand curves for flour and bread were never downward sloping in Britain during the 18th and 19th centuries.

The demand curve many rise for another reason: availability and the price of substitutes. The Irish potato famine shot potato prices up due to reduced supply. With potatoes dear, bacon – the cheapest meat – substituted. Demand for bacon pigs rose along with their price during the Irish potato shortage.

A good that violates the ‘law of demand’ by not having a downward-sloping demand curve is known as a Giffen good; named by Alfred Marshall after Scottish statistician and economist Robert Giffen, who proposed the paradox after observing the purchasing habits of the poor during the Victorian era.

2 assumptions lurk behind the facile assumption that demand grows at a lower price: 1) that all people have the same tastes, and 2) that these tastes remain constant regardless of wealth. Since these conditions are often not true for varying reasons for various goods, the law of demand is spurious as a generality. Demand curves may be most any shape. 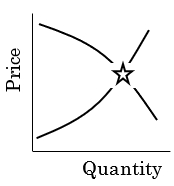 Let us return now to the fictional account of how the market system is contrived to make sense. Put together a supply schedule and a demand curve and out pops an equilibrium price (the star point). This price is the intersection point where the quantity demanded equals the quantity supplied. Upon this simple mythical model lays the entire foundation of capitalist economic theory.

The belief that price and quantity are jointly determined by the interaction of supply and demand is perhaps the most central tenet of conventional economics. ~ Steve Keen

A root problem of the price model has to do with equilibrium: a tidy concept which has nothing to do with economics in the real world. The dynamics by which prices are determined do not emerge from mystical equilibrium points. Instead, prices are picked by sellers based upon their intuition of what the buyers at the moment might bear. Misjudgments trigger adjustments.

If economics is to have any relevance to the real world – if economics is even to be internally consistent – then it must be formulated in a way which does not assume equilibrium. ~ Steve Keen

A price that exceeds cost yields a seller profit. Profit is the propelling force of market-driven economies. If not for profit, nothing would be made, according to neoclassical economics.

Shifts in demand or supply arise from a myriad of causes, such as improving technology, or a change in consumer preferences. Such dynamic developments move one or both curves or alter their shapes. Even hypothetically, characterizing the price mechanism is impossible.

Both the demand and supply aspects of conventional economic analysis are unsound: first, market demand curves don’t obey the ‘law’ of demand and can have any shape at all. Secondly, a supply curve doesn’t exist. ~ Steve Keen

In economics theory, falsity scales nicely. The explanatory power of the price model – the microeconomic law of supply and demand – was generalized to explain the economy at large: total output, aggregate demand, and general price level. Demand and supply are also employed in theories of macroeconomic finance: money supply and demand, and interest rates.