There is instability due to the characteristic of human nature that a large proportion of our positive activities depend on spontaneous optimism rather than mathematical expectations, whether moral or hedonistic or economic. Our decisions to do something positive can only be taken as the result of animal spirits – a spontaneous urge to action rather than inaction, and not as the outcome of a weighted average of quantitative benefits multiplied by quantitative probabilities. ~ John Maynard Keynes

Despite abundant evidence that humans are emotively driven – prodded by desires, constrained by fears – conventional economic theory assumes that decisions are dispassionate. Though panic and euphoria have repeatedly bloomed and faded with slight provocations, markets are assumed by conventional economists to be “rational.”

Stewing in prolonged denial from the onset the Great Depression, Irving Fisher was only enthusiastically conforming to orthodoxy about investor rationality. His delusion on the subject of rationality was not the last.

The self-inflated view of a rational market revived with stock prices. In the 1950s, Milton Friedman rendered rationality relative: the stock market was, at least, more rational than the government. Friedman considered Fisher his favorite economist.

The Chicago school of economists, led by Friedman, and the brain trust known as the Massachusetts Institute of Technology (MIT), statistically showed that short-term stock price movements were random, but that extreme movements in stock prices occur roughly 10,000 times more often than they would in a random process. These monetarist men concluded such sharp movements indicated rationality in play.

Instead, they had produced evidence of irrational noise in trading. If traders were rational in basing their decisions purely on economic information related to listed firms, this repeated jitter effect would not exist. Instead, the jumpiness is simply jockeying for gains and loss avoidance, and in doing so exacerbating volatility. 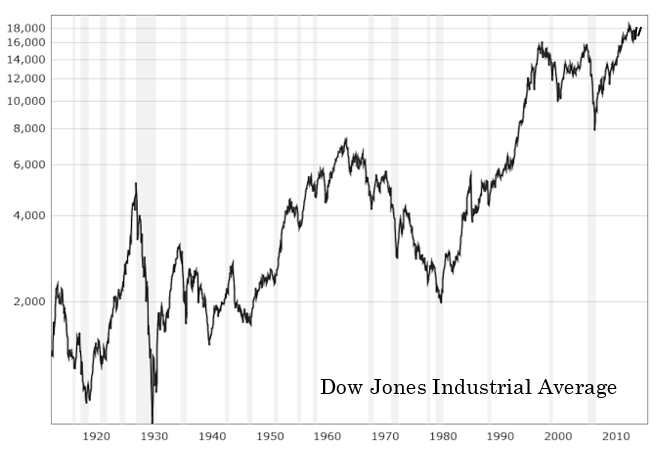 Financial markets are very noisy. Most of the ‘noise’ is due to human emotional factors. ~ Israeli economist Yoash Shapira

The US central bank largely reined in the volatility of short-term interest rates from the mid-1990s. Instead of calming financial markets, it made the leaps and crashes more severe, and prolonged the duration to recovery. 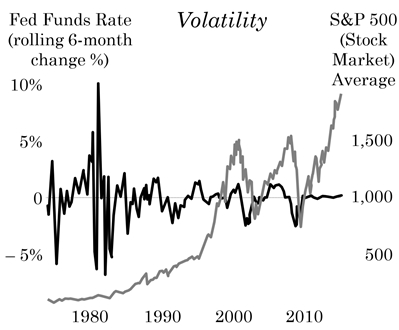 The increasing concentration of wealth meant that fewer punters were able to move the market, and thereby the stampede of the herd instinct was more thunderous. The longer recoveries were the “once burned, twice shy” syndrome of large investors, who, by dint of increasing globalization, had a more diverse menu of international investment options.

A noisy stock market overreacts to past records of success and failure on the part of business firms, and prices with great imprecision. ~ American financial economist Robert Haugen

The efficient market hypothesis is the myth that markets behave rationally . One its prime proponents, American economist Eugene Fama, posited this tautology:

A market in which prices always ‘fully reflect’ available information is called ‘efficient.’

Fama claimed that the US stock market fit the bill. The evidence of such was “extensive, and (somewhat uniquely in economics) contradictory evidence is sparse.”

The efficient markets hypothesis has been a cornerstone of mainstream financial economics for decades even though it provides no testable predictions about extreme events and even considers them highly improbable (or even nonexistent). ~ Czech economist Ladislav Kristoufek

As American statistician Edwards Deming observed “you expect what you inspect.” Closer inspection revealed the flaws in Fama’s fable.

Investors do behave like a school of fish, but rationality is not the driver. The herd instinct is.

In the short term, stock trading has nothing to do with economic conditions. It instead involves leaps of anticipation: guessing what will happen next in the market, which is a projection of social psychology, not economic.

When traders in a market have the same confirmation bias, market prices are not efficient and do not reflect all the information available. ~ American marketing maven Thomas Gruca

Keynes and Haugen cogently argued that few, if any, stock market speculators trade on the basis of specific news per se. Instead, they trade based on how they think other market participants will react to news of any sort, including to stock price movements in and of themselves.

Popular stocks, by virtue of being in the news, benefit from sheer momentum. Price propulsion may drive such stocks to excessive valuations from which future returns are bound to disappoint, causing a corrective dive.

Such volatility wears on a stock. Less-risky stocks outperform their uppity rivals in the longer term. Over the course of decades, the least popular stocks have outperformed the most popular ones by an average 7% a year.

Testosterone and cortisol are hormones linked with mood and behavior. Humans, by default female, become male when their embryos are awash with a relatively high concentration of testosterone.

Most stock traders are male. Traders with high testosterone levels anticipate profit, and thus are bullish.

Male traders, driven by an increase in testosterone due to a successful investment, may take exaggerated risks, which, in turn, can create price bubbles. ~ Israeli economist Ze’ev Shtudiner

Hormone levels invariably become part of the social ambience. Whether in the pits of the stock market floor or in trading rooms, trading collectively creates an atmosphere among male stock traders through hormonal transference.

Rationality and fickle hormone levels are not kissing cousins, as stock markets have repeatedly shown.

Price-driven volatility has greatly inhibited investment spending over the years. Ultimately, it has acted, and acts, as a serious drag on economic growth. ~ Robert Haugen

American economist Lawrence Summers observed that it was impossible to tell a rationally random market from an irrational one.

The probability of 10 consecutive heads is 0.1 percent; thus, when you have millions of coin tossers, or investors, in the end there will be thousands of very successful practitioners of coin tossing, or stock picking. ~ Alan Greenspan

Seismic stock movements demonstrate the human herd instinct and belie randomness. Sudden price crashes occur semi-regularly but would occur every billion years or so if the market were rational.

A fractal is a set of scale-invariant, self-similar, iterative patterns. The images on the covers of the Spokes books are fractals. (See Spokes 5: The Echoes of the Mind for more on fractals.)

American investor Edgar Peters developed the fractal market hypothesis to statistically characterize prices on financial markets. It was never intended as a theory of how markets actually behave.

What was learned from this perspective is that market stability is typically maintained because traders differ in their investment horizons. Instability results if a market becomes dominated by investors with the same time horizon, particularly immediacy (short-termism).

The most turbulent times of the Global Financial Crisis (2007 onward) can be very well characterized by the dominance of short investment horizons, which is in hand with the assertions of the fractal markets hypothesis. ~ Ladislav Kristoufek

The bust that followed [the 2000s real estate boom] is clear evidence that capital was misallocated and could have been put to better use. ~ Sheila Bair

Since becoming a central banker, I have learned to mumble with great incoherence. If I seem unduly clear to you, you must have misunderstood what I said. ~ Alan Greenspan

American economist Alan Greenspan was widely viewed as a financial god during his tenure as US Federal Reserve Chairman (1987–2006). Greenspan was an avid consumer of voluminous economic and financial statistics, but unable to see the forest for the trees.

How do we know when irrational exuberance has unduly escalated asset values? ~ Alan Greenspan in 1996

Greenspan kept short-term US interest rates too low for too long, repeatedly blowing asset bubbles, as the low cost of money encouraged speculative investments on growth that were not sustainable.

Greenspan’s focus on statistics was a poor substitute for comprehending his charges: financiers. Greenspan’s incompetence owed to his inane faith in the rationality of capital markets.

That markets are rational and efficient is a myth, though a myth still widely believed, as cherished beliefs are illogically clung to; such is human nature.