New businesses often bring innovation to the market as their raison d’etrê. While some startups offer something new in the way of products or services, the secret of success for many has been in improved efficiency and/or delivering consumer convenience.

In 1907, Belgian-American chemist Leo Baekeland discovered the formula for an inexpensive, synthetic, nonflammable, durable, and versatile plastic, whereupon he started Bakelite in 1909 to market this now universal material which egregiously pollutes the planet for many centuries to come.

American industrialist Henry Ford did not invent the automobile, nor the assembly line. What he did do was cost-consciously innovate a way to mass-produce automobiles that middle-class Americans could afford, starting Ford Motor Company in 1903.

Be particular. Never sell anything you would not want yourself. ~ Bernard Kroger

Bernard Kroger, a shopkeeper’s son, invested his life savings of $372 (~$9,800 in 2018 dollars) to open a grocery store in downtown Cincinnati in 1883. The innovation that took Kroger nationwide came in 1916, when Kroger started self-service shopping. The tradition had been that merchandise was kept behind counters and delivered to customers upon request.

In the 1930s, Kroger became the first grocery chain to monitor product quality, and also the first to be surrounded on all sides by parking lots.

Ray Kroc bought into a small, San Bernardino burger joint in 1954, just after Richard and Maurice McDonald had invented the “speedee service system” for their hamburgers, milk shakes, and fries. Kroc had sold the McDonald brothers milkshake mixing machines and was impressed with the way that the McDonalds ran their restaurant.

The success of MacDonald’s is now legend. Their fast-food innovation brought a spate of imitators in the 1960s.

In 1967, Herb Kelleher and Rollin King started an intrastate airline in Texas. The ticket to success for Southwest Airlines was getting noticed via its quirky culture, serving neglected markets, and offering low fares by stripping out the service conveniences then common with the established air travel carriers in the highly regulated American market. Southwest Airlines was able to thrive only after airlines were deregulated in 1978. 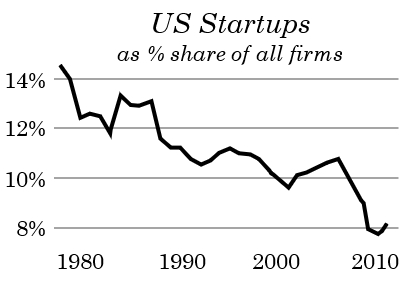 Software has been the latest hurrah of American innovation, birthing many companies which are now household names, as well as many more which have been gobbled up by the giants or gone by the wayside. This wave of mindware masks an overall loss of startup vigor in the American economy, largely owing to the decline in manufacturing.