In the wake of the 1970s oil crises, capital was flooding into the American oil and gas industry in the early 1980s. Erstwhile conglomerate Apache Corporation sought to tap the capital flow in a novel way: wrapping private oil & gas assets into a new ownership structure that was akin to a partnership, but which was traded as a stock company.

This master limited partnership (MLP) gimmick spread, going mainstream in the 21st century. The essence of an MLP is retaining very little of its earnings. MLPs are “pass-through” companies which annually pay out more or less what they take in. As contrasted to earnings-retaining corporations, MLPs are distorporations.

Many of the standard rules that corporations have to follow about retaining earnings do not apply to distorporations. As earnings are distributed, distorporations largely avoid corporate tax, which is the one of the allures.

Distorporations still protect investors from liability. Unlike corporations, which may fund themselves via retained earnings, pass-through businesses have to be far more intertwined with investors: staying alive means routinely inhaling and exhaling capital.

Distorporations now have a valuation on American markets well in excess of $1 trillion (2012). Distorporations represent 9% of the number of listed companies, and pay out 10% of the total dividends, but soak up 28% of the equity raised.

These statistics underplay the gravity of the American distorporation. Distorporations house the management of private-equity firms, and thus sit atop industrial empires of much greater worth than their stated value. 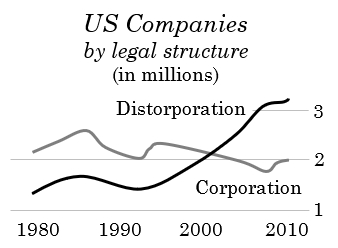 Distorporations shareholders are a select clique. Quirks in the investment and tax laws keep distorporation shares out of the hands of staid institutions and the average stock punter. Hence, little-understood laws amplify wealth inequalities in the capital-owning class.

Because of their abiding need for continual financial support, distorporations inject fragility into the economic system. The establishment of distorporations has created a structural change in American capitalism which has gone largely unnoticed.