In 1900, there were ~500 American car makers. In 1908, 200 remained, having gobbled the others. In 1960, Britain had 16 banks; a decade later, 6. In both instances, rapid consolidation came from a flurry of mergers. In everything from soft drinks to steelworks, mergers happen in waves. 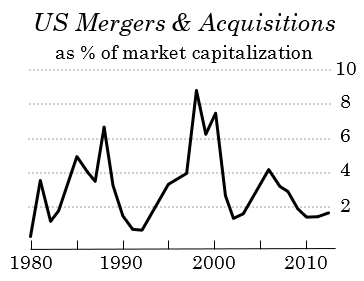 Shocks set off merger waves. Some firms are quicker than others to respond to the disruption or suffer less damage. This divergence lets the strong mop up the weak. Ronald Coase had suggested as such in 1937.

Any industry-shaking shock may trigger a merger wave. A slump in demand can leave factories and shops idle. Spare capacity prompts more efficient firms to take over the sloppier ones.

Regulatory shocks are also important. The deregulation of US airlines spelled consolidation. Many deals in the late 1990s were spurred by the government loosening its grip.

Once a merger occurs, industry copycats become likelier. The first deal removes a competitor, potentially raising profitability for all. Other targets take on a shine to acquisitive bosses. Meanwhile, more pessimistic firms see the creation of a larger rival as a threat and seek defensive unions. The sensible strategic response to one deal may be another. A wave forms.

Shock and strategy explain how a merger wave begins within a single industry, but not why simultaneous waves occur. The answer is found by following the money.

Financial conditions are paramount. Managers have to pay for their merger meals. Piling on debt is only possible when lucre is loose and interest rates low.

The most active acquirers are those with mounds of cash on hand. To acquire a hoard of lucre without giving it back to shareholders in one way or another indicates strong-willed management: the domineering attitude characteristic of corporate empire builders.