The lure of economies of scale drives companies to dominate and consolidate, forming oligopolies. An oligopoly is the overwhelming dominance by a few firms within an industry: usually a half-dozen or less.

Worldwide, well over 50,000 companies do business internationally. Fewer than 150 corporations control 40% of the monetary value of all transnational companies. Most of them, including the most powerful, are financial firms.

The penultimate achievement is monopoly: a single firm dominating all others. For decades, Microsoft had a virtual monopoly in desktop computer operating systems, until the advent of smartphones; it still does for office productivity software.

Oligopolies and monopolies are to market economics what massive bodies are to spacetime in physics: a powerful warpage. Market power sucks the “free” out of “free enterprise,” and turns societies into plutocracies as politicians fall into the gravity of corporate concentration.

In the 2010s, US corporations reaped spectacular profits, which were matched by runaway share prices. Meanwhile, despite it being dirt cheap to finance, these companies did not bother to invest large sums. They did not need to; the competition had been largely vanquished. (Start-ups as a share of all companies declined in many wealthy nations around the world during the early 21st century. In the US, start-ups went from 10% of all companies to 8% 2000–2015, continuing a well-established trend.) Barriers to market entry that companies had erected let these corporations contentedly milk their customers. Profits as a share of output rose by 50% in the 30 years 1985–2015.

Over 75% of American industries have become more concentrated since 1980. The concentration is especially pronounced in the technology sector. Apple and Google provide the software for 99% of all smartphones. Amazon utterly dominates online shopping and is encroaching into streaming music and videos. 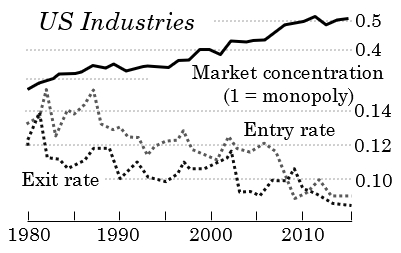 50% of all American financial assets are controlled by just 5 banks. In the late 1990s, the top 5 banks controlled little more than 20%.

In the 2010s, 6 of the largest US airlines became 3. As of mid-2018, 4 companies controlled 98% of the American wireless market. If allowed by the federal government, the merger of T-Mobile and Sprint would reduce wireless market control to 3 firms.

Consumers pay handsomely for the privilege of modern capitalism. The difference between how much it costs American companies to make their products and how much they sell those products for – a metric of market power – was in 2019 at its highest level in a century.

The lack of competition in the market for mobile phone service in America costs consumers $65 billion a year. Such rent-taking (excessive profits) is common in countries which do not effectively regulate corporate power (antitrust regulation). The United States is exemplary.

This economy is rigged. ~ US Senator Elizabeth Warren in 2017