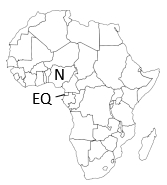 Though Africa was the evolutionary birthplace of humanity, it has been the last continent to develop economically. Having all of history to learn what not to do did nothing to prevent inequity on a breathtaking scale.

Tiny Equatorial Guinea is a former Spanish colony. Now ostensibly democratic, it is politically controlled by a strongman who, along with a few business cronies, has appropriated most of the country’s wealth. In the decade 1996–2009, GDP grow almost 40% each year, largely on oil revenues. Little of it trickled down. Though Equatorial Guinea’s wealth per person is the highest in Africa, over 75% of the people there live below the World Bank’s poverty line.

Government spending on health and education in Equatorial Guinea lags far behind the sub-Saharan African average. To go to the hospital, patients must bring their own sheets, and share their rooms with rats. Civil rights lawyer Tutu Alicante says that visiting a public hospital is like “signing your own death sentence.”

A bit north of Equatorial Guinea lies Nigeria, a former British colony, now supposedly a federal republic modeled on the United States. The country is often called the “giant of Africa” because of its large population (182 million) and its economy, which is the 20th largest in the world, and the largest in Africa (having surpassed South Africa in 2014).

The Nigerian government is run as a racketeering operation. The “patronage economy” encourages legislators to create ever more government agencies, which they populate with their cronies. Many new agencies then start issuing licenses and permits to rake in revenues.

Senior managers at large companies spend an average of 18% of their time dealing with government demands, while potentially productive investment funds are siphoned off to line the pockets of bureaucrats. On the World Bank’s ease-of-doing-business index, Nigeria ranks 169th out of 190, behind such prosperous and business-friendly countries as Iraq and Sudan.

Oil extraction ushered rapid growth in Nigeria in the early 21st century, which slowed as world oil prices tumbled from the mid-2010s. This source of ready government revenue drying up aggravated corruption in government.

Nigerians are tribal, very social, and those that prosper are agile in business: a combination that has fostered organized crime to flourish, both within the country and among expatriates. Notable trades for Nigerian networks are drugs and sex trafficking.

Nigerian inequality is pronounced. At least 1/3rd of the population is stuck in extreme poverty. 10 million Nigerian children are not in school, and half of all young adults are unemployed or underemployed.

Impoverished rural areas have rebelled. Political and economic violence is endemic throughout the country.

Given that, what should be unsurprising is that the environmental quality in Nigeria has grossly degraded in recent decades. Nigeria had the fastest rate of deforestation in the world 2000–2015.

Pollution of every kind is extensive anywhere there are Nigerians. Nigerian cities are filthy.