Starting in 1949, the revolutionary Communist government, led by Mao Zedong, waged war on inequality of all kinds. By the time the Cultural Revolution ended, having wreaked havoc throughout Chinese society, the government had effectively abolished private property, and had even mandated a bland, unisex style of dress.

The equality was a false one. Economic resources were concentrated in the hands of party cadres, in a hierarchical pecking order. That withstanding, inequity between urban and rural residents was not especially pronounced.

It is good for some people to get rich first. ~ Deng Xiaoping

Since China’s embrace of market economics, inequality has surged to be one of the greatest in the world, as has China’s proliferation of waste and pollution. The richest 10% of Chinese make 13 times as much as the poorest 10%, compared to a 5 times multiplicand for Americans in these income brackets. For how capitalism changes societies and environmental quality, look at China. 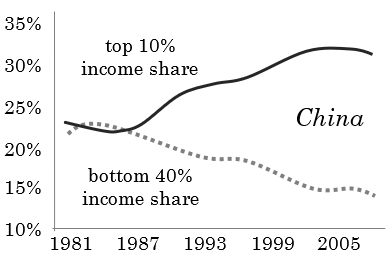