Economists speak of countries rich and poor, of the industrialized world and developing nations. The reality is much more nuanced. Wealth and poverty coexist in all countries. Quality of life cannot be measured simply by dividing national income by number of people.

In 2015, American per-capita GDP was 56% higher than Italy, but Italian life expectancy was 3 years longer. The life expectancy of black Americans is lower than rural Chinese, and mortality for urban black American infants is higher than those born in Cairo, Egypt. The gross inequities rife throughout the world means that the world’s peoples are all needlessly impoverished. While the poor simply live in fear, the rich live in fear of the poor.

The inequality distinctions between countries are often not as great as the disparities within them. The gaps grew in the wake of the 2008 recession and continue to widen.

Britain has the widest disparities, with average GDP per head in central London over 9 times more than in parts of Wales. In America, the District of Columbia is 5 times richer than Mississippi. Germany’s regional discrepancies are relatively small, yet incomes in the most affluent areas are still almost 3 times that of the poorest. 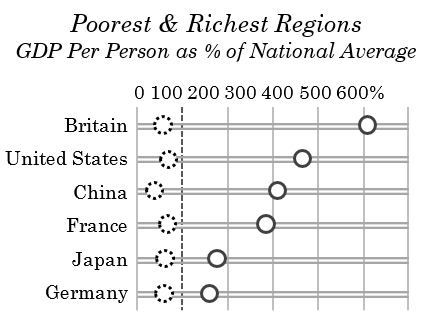 Wealth and poverty tend to concentrate geographically and generationally.

Wealth positions at the top and bottom of the distribution are particularly sticky, with very wealthy parents able to secure a substantial wealth advantage for their children, and parents who live in debt especially likely to have adult children who are also net debtors. ~ American sociologists Fabian Pfeffer & Alexandra Killewald

Over the past 3 decades, 53% of countries have seen an increase in income inequality, with this trend particularly pronounced in advanced economies. Furthermore, today’s economic strains are likely to sow the seeds for longer-term problems. ~ World Economic Forum in 2018 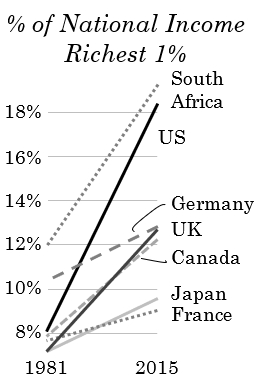 82% of the wealth generated globally in 2017 went to the wealthiest 1%. From 1980 to 2015, the richest 0.1% of the world’s population increased their combined wealth by as much as the poorest 50%: the wealthiest 7 million taking in as much as the most impecunious 3.5 billion. For those in between, income growth has been sluggish or even nil. Wealth inequality is most extreme in Russia and the US. 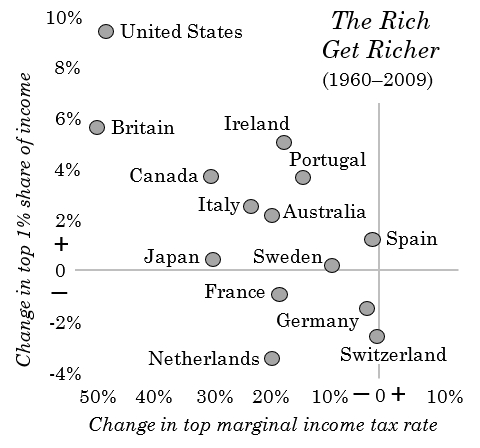 Wealth concentration is as high as in 1905. ~ Swiss economist Josef Stadler in 2017

The 85 richest people on the planet control as much wealth as the poorest half of the world’s population. 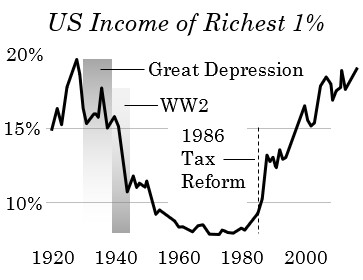 The separation of the elite from the masses may be a recurring process in sociocultural systems that is again coming to a head in hyperindustrial societies. The division of labour leads to a division in lifestyles. Increasingly, the wealthy live in gated communities, go to separate schools, and have their own security, lifestyle, and increasingly separate values. Globalization could well be accelerating the process; not only does it provide opportunities for great wealth, it also breaks the economic tie between the elite and the local economy. ~ Frank Elwell