There is the idea, still widespread among economists, that economic growth depends largely on the rise of “human capital.” At first glance, this seems to imply that labor should claim a growing share of national income. But that is a whimsical interpretation of an allusion without foundation.

Industrialization and its digital follow-on – robotics – dispelled those droll notions. Workers became dispensable inputs that served machines purchased with capital. The value of skills remained, but this was not enough to overcome the power of corporations, especially before and after the mid-20th century heyday of labor unions in the US and UK.

A surplus of labor ensured the superiority of capital in generating income. Regressive tax policies against ordinary workers and those favoring the wealthy further aggravate the market mechanics of rewarding capital over labor. Inequality begins with capitalism and is reinforced by plutocratic governance.

Economics is a political dynamic, and those with money tip the scales in their favor.

Governments overwhelmingly serve the interests of economic elites to the detriment of ordinary people. ~ Oxfam International

When the rate of return on capital exceeds the growth rate of the economy, as it generally does, wealth accumulates among the rich faster than working people could ever hope for from their wages; hence capitalism acts as an amplifier for inequality. Dire circumstances have been the only mollifiers to the propensity of capitalism to generate inequity: most particularly, wars and economic downturns.

A reduction in economic inequality took place in most developed countries between 1930 and 1950. The World Wars and Great Depression caused greater drops in the income of the wealthy than workers, and so temporarily lessened inequality.

Recovery meant resurgence, abetted by governmental tax policies and subsidies for the well-off, which were engineered, via political lobbying, to favor wealthy individuals and corporations. A lessening of economic inequality in no way spelled a loosening of political inequity.

The falling share of income to labor means that productivity gains no longer translate into fatter pay packets. Instead, a bigger slice of the returns from growth accrue to owners of capital.

Between 1982 and 2017, the wealth of the 400 richest people in America increased 29-fold – from $93 billion to $2.7 trillion – while many millions of hardworking citizens remained stuck on an economic treadmill. During this period, the tsunami of wealth didn’t trickle down. It surged upward. ~ Warren Buffett 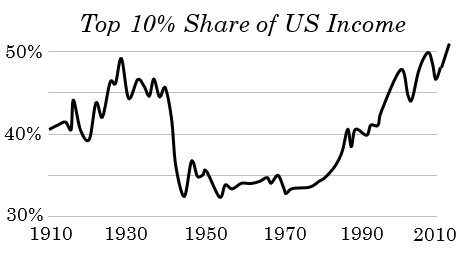 While America’s super-rich congratulate themselves on donating billions to charity, the rest of the country is worse off. Today 1% of Americans own 37% of the total national wealth. Millions of Americans are struggling to survive. The gap between rich and poor is wider than ever, and the middle class is disappearing. ~ German economist Thomas Schulz in 2010 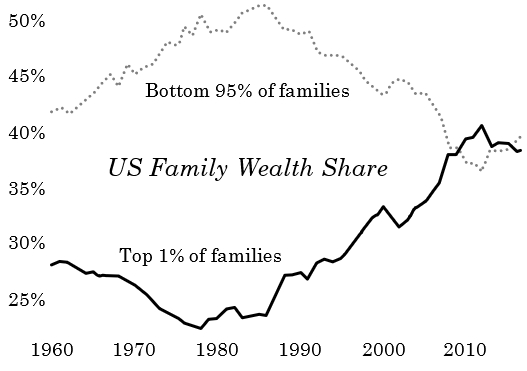 Even among wage earners, the rich have done vastly better than the rest. The share of income earned by the top 1% of workers has gone up even as the share of income to labor overall share has dropped. Excluding the 1% cream of the crop, the decline in labor’s share of income in the US has declined twice as fast.

(The US federal government mandates a minimum wage level which only brings full-time workers to just above the federal poverty level. About half of the state governments impose a slightly higher minimum wage on employers. Pro-business politicians (Republicans) are against minimum wage impositions, arguing that it costs jobs. This is untrue. Further, the redistribution of income–from business owners to labor–stimulates the economy, as poorly paid workers spend all their wages to survive.) 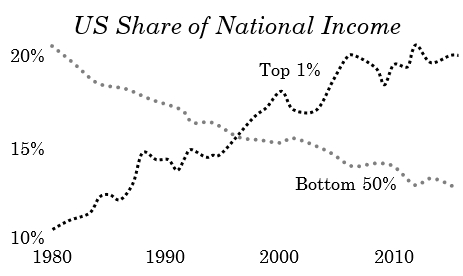 Men in their thirties have lower wages than their fathers’ generation did at the same age. ~ American political scientists Ron Haskins & Isabel Sawhill

The lower end of American real wages has stagnated for over a half century. Owing to a surfeit of labor, workers entering employment typically make less, adjusted for inflation, than the generation before them: a declining trend in the real entry-level wage rate. This applies more to men than women, who are ever the underpaid gender. American women retail workers make, on average, 28% less than men for the same work. Women’s increasing presence in the labor pool since the 1970s has helped suppress overall wage levels.

Since the late 1960s, every new American generation has made less in median lifetime income than the previous one, and it all starts at age 25. ~ Turkish-American economist Fatih Guvenen

In 1978, American men made an average income of $45,879. In 2015, the average was $700 less (in inflation-adjusted dollars), and that figure hides a gross discrepancy between those at the top and the masses below.

While the income of 90% of American workers has stood still since 1973, incomes tripled for those in the top 10%.

We cling to the myth of meritocracy. ~ American economist Robert Frank

The United States has the highest rate of income inequality among Western countries. The $1.5 trillion in tax cuts in 2017 overwhelmingly benefited the wealthy and worsened inequality. In 2018, the United States had over 25% of the world’s 2,208 billionaires. There is thus a dramatic contrast between the immense wealth of the few and the squalor and deprivation in which vast numbers of Americans exist.

For almost 5 decades the overall policy response has been neglectful at best, but the policies pursued over the past year seem deliberately designed to remove basic protections from the poorest, punish those who are not in employment and make even basic health care into a privilege to be earned rather than a right of citizenship. ~ the United Nations in 2018

After narrowing from 1940 to the mid-1970s, the median black-white earning gap in the US has since grown as large as it was in 1950. ~ American economists Patrick Bayer & Kerwin Charles in 2018

Meritocracy is a myth. Social systems that reward through wealth, and which increase inequality, don’t aid social mobility, and people pass on their privilege to their children. ~ English sociologist Jo Littler

You can never be too rich or too thin. ~ English Duchess Wallis Simpson

The Duchess of Windsor had a point: people who make a surfeit of income report being happier than those who struggle economically.

Money does not buy happiness, but at least you can suffer in comfort. ~ American author Lillian Bernstein