In some countries, those at the top of high-skilled, licensed professions, such as doctoring and lawyering, are quite well paid. More generally, worldwide, money flows into corporations, and especially to those who sit at the peak of its financial pyramid.

The wellspring of inequality begins in the boardroom. Top managers of major corporations have the power to negotiate their own remuneration. Hence, they have been able to procure stratospheric incomes compared to others.

The salary of the chief executive of a large corporation is not a market award for achievement. It is frequently in the nature of a warm personal gesture by the individual to himself. ~ John Kenneth Galbraith

In 1950, the average American corporate CEO earned 30 times that of the average worker. In 2018 it was 330 times. In 2018, which was a good year for the American labor market, CEO pay increased at twice the rate of ordinary wages. 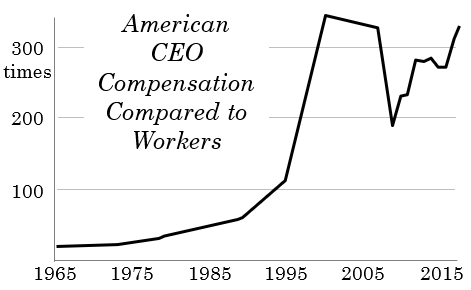 Every US public company must have a board which oversees how the corporation is run. The median compensation of a board member for one of the top 500 US companies (by revenue) was $263,500 in 2015: that’s 5.5 times what a typical worker makes in a year.

Board members’ strenuous task is to attend an average of 8 meetings during the year. Given such rich reward for such meager effort, it is not hard to see why CEO salaries are so stratospheric: overseers are paid off not to bite the hand that feeds them. That, and those on corporate boards are part of the elite that perpetuate the economic oligarchy – rocking the boat upon which they sail would be crass.