Global elites are increasingly becoming richer. Yet the vast majority of people around the world have been excluded from this prosperity. While stocks and corporate profits soar to new heights, wages as a percentage of gross domestic product (GDP) have stagnated. ~ Oxfam International in 2017

The root of modern inequality lies in the relative returns of labor and capital. This is essentially an externality of the price mechanism. With a surplus of labor and a high demand for capital, those with a surfeit of funds reap rewards while workers toil for meager leftovers. 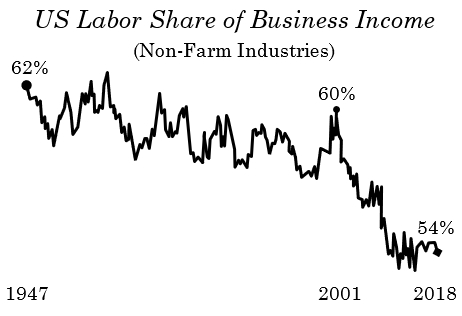 The stark reality is that globalization has reduced the bargaining power of workers, and corporations have taken advantage of it. ~ Joseph Stiglitz

Based upon historical trends, Hungarian-born English economist Nicholas Kaldor concocted in 1940 a 6-stage model of the economic growth and contraction. One conclusion was that the labor/capital split was stable over the long run, with short-term wiggles due to the ups and downs of business cycles. Owing to his cogent writing, Kaldor’s figure that labor took a 2/3rds cut and capital 1/3rd was uncritically accepted by most economists.

In the United States during the 19th century, 64% of economic gain went to labor. After the 2nd World War, American workers reaped 62%. In the wake of the 2008 recession: 54%, and that figure that has fallen since. Starting in the 1970s, employers no longer shared the benefits of increased productivity with the workers who produced it. Between 1973 and 2016, average hourly wages grew 12%, whereas productivity increased 74%. Kaldor’s labor/capital split is a slippery statistical confection, not an economics constant.

California’s Central Valley is the most productive agricultural region in the world, but the workers responsible for the Central Valley’s wondrous harvests remain impoverished.

The people who grow our food can’t afford to eat it. Those who work in the fields all day long don’t have access to the fresh produce that they harvest. ~ American health policy maven Joel Diringer in 2016