The Economic Value of Skill

In the past several decades, the American and British labor markets have increasingly favored the well-educated. Wages for college graduates have increased in real terms, while those without high-school diplomas has dropped.

This recent rise in earning power for skilled workers is a historical rarity. In the past, the skilled-wage premium has been fairly stable, save for 2 sharp declines.

The 1st drop came in the mid-14th century. Life in medieval England was short and interest rates high. Taking on a 7-year apprenticeship to become a craftsman came at a heavy opportunity cost.

Interest rates in England began to decline toward the end of the 13th century. When the Black Death struck in 1348, wiping out over 1/3rd of the English population, interest rates fell further. Apprenticeships became much more attractive. The increased skilled labor supply relative to unskilled workers drove down the wage premium. 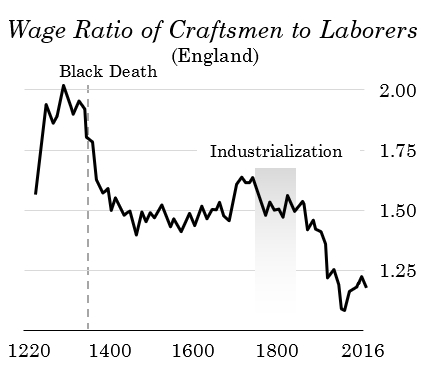 The 2nd big decline came with industrialization. Craftsmen whose skills took years to hone were replaced by machine operators with little training. The share of unskilled workers in the English workforce rose from 20% in 1700 to 39% in 1850. The ratio of artisan wages to laborers’ wages started to drop near the turn of the 19th century and did not recover until 1960.

What has distinguished the computer age to date from the era of industrialization is the favoring of skilled workers. This may change as smarter robots become available. As the wage premium for a particular skill set rises, firms are given a greater incentive to replace the workers who have such skills.

As it is, 4 of the 5 fastest-growing American occupations are in personal care: none of which necessitates having gone to college.