The upshot is that jobs requiring middling skills have declined as a share of employment. Meanwhile, highly skilled workers remain in demand. Robotics penetration into service industries will accelerate this trend, creating an even more unequal economy.

For the foreseeable future, automation and digitalization can be expected to push down on levels of employment and wages, and contribute to increases in income and wealth at the top of the distribution. ~ World Economic Forum in 2018 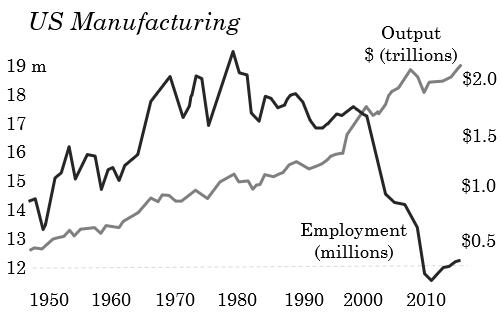 The loss of mid-skill jobs has meant that the labor market for low-skilled has been flooded, making it easy for companies to pay less, and thereby pushing wages toward the legal minimum, without health or pension benefits. As the rich get richer, a hand-to-mouth existence for common folk has become more common. With bouts of exception, the middle class economically slid downhill with the maturation of capitalism.

Families unable to escape poverty despite working full time blight any economic system. Unlike most other rich democracies, America chooses not to provide those who work with a wage sufficient to avoid impoverishment. Indeed, its wage structure causes taxpayers to subsidize low-wage employers. ~ George Tyler

10% of American working households are poor. A household led by a woman, someone in an ethnic minority, or with a low education is likely to be employed but impoverished.

There are millions of Americans working, playing by the rules, and they’re still trapped in poverty. ~ American sociologist Scott Sanders

The culmination of the foregoing trends, exacerbated by favorable tax treatment for capital and corporations, has been to widen the income gap between those who make money with money and those who more diligently work for a living. This trend is worldwide, and especially pronounced in countries which are economically developed.

Trade and technology’s toll on wages has often been abetted by loosening employment laws. Stiff labor-market regulation propped up labor’s share of income in Europe in the late 1970s. Then, prompted partly by stubbornly high unemployment, employment liberalization swept the continent as a political movement. Labor’s share of income plummeted as a result. Privatizing state-owned companies further loosened labor’s hand on the rudder of economic reward.

Income inequality illustrates the moral corruption inherent in capitalism. From the late 20th century, workers in the financial sector have been paid at many multiples of those laboring in other industries. Also notable is the jump in compensation to top-level corporate managers.

Bank tellers are basically currency cashiers and are paid accordingly. In contrast, high-end financial fiddlers are inordinately compensated because of the obscene volume of money they can generate by their machinations. Corporate management rigs employment to reward those relative few who have the specific skills and social connections to join the clique.

One of the sorriest consequences of our financial system is the toll exacted on the legitimacy of providing great rewards for great contributions. Finance certainly contributes to prosperity, but the vast wealth secured in recent years by a small number of financiers does not map into a commensurate increase in created or financed new industries or turned around failing companies. Rather, they have used subsidized borrowing to leverage the returns of questionable schemes, secure in the knowledge that if things go wrong the authorities will step in. ~ Indian American economist Amar Bhidé

The gross income discrepancies that generally exist owe to the nature of the labor market, which is unique compared to other goods. Unlike all other commodities markets, the supply of labor comes from consumers, whereas labor demand is determined by producers.

Labor is like other industries in not being competitive in the sense that economists use the term. What that means is that workers will not receive the value they contribute, as the economic deck is stacked.

Instead, wages are determined by the relative bargaining power between employers and workers, and that balance of power has always been skewed away from labor. This is especially true in the absence of strong labor unions, which have become an anachronism owing to the political sway that corporations have. Labor union power in the US and UK is puny compared to what it was in the 1930s.

The American middle class in the immediate post-war period was largely populated by blue-collar workers who attained their socioeconomic status thanks to unions.

The US auto industry symbolized blue-collar upward mobility. The real incomes of autoworkers doubled from 1947 to 1973. Because many other companies – unionized or not – adopted auto-industry pay rates, wages went up across the board. This golden age for labor ended with the 1st oil shock in 1973. Inflation set economies reeling. Companies looked for ways to lower costs. As labor was the highest cost, workers were first to feel the squeeze. 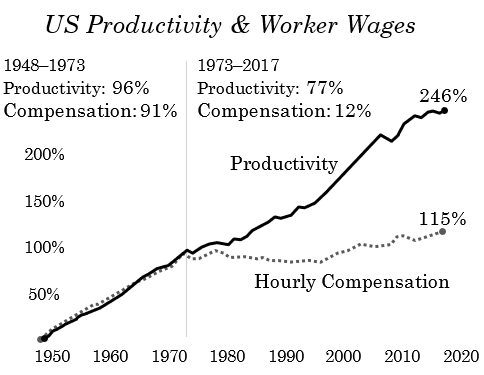 The labor market doesn’t work the way the classic models suggest, especially since union membership and federal labor standards have been eroded by years of corporate attacks. Wages are not set by some pristine equilibrium between supply and demand; workers are not paid their marginal contribution to their firms’ output. In the real world, pay is determined by a negotiation between workers and employers, and employers typically have a lot more negotiating power than their employees do. ~ American labor maven Ben Spielberg

Globalization and firms moving factories overseas from the 1970s eviscerated labor’s power. The high inflation in the 1970s destabilized economies, withered workers’ savings, and ironically gave rise to reactionary political movements in the US and UK (Reagan & Thatcher, respectively) which would further undermine union power.

Oddly, the political reaction was supported by blue-collar workers, who were worried over what was happening to them, but failed to comprehend what would happen with a change of regime that favored business. Reagan’s pandering with optimism worked, and workers paid the price.

One of President Reagan’s earliest acts was to break the air traffic controllers’ union; a union which had endorsed Reagan for president.

With workers fearing for their jobs, highly profitable firms across America successfully demanded large-scale wage and benefit concessions across the board, allowing them to freeze total employment cost in real terms (i.e., adjusted for inflation).

For steady employment, those relative few with capital largely determine who is allowed to make a living. Like musical chairs for livelihoods, getting a job is a competitive scramble. Underneath it all, the market mechanism powers a heartless system operating under the guise of ‘freedom.’

Government is left to remedy the systemic deficiency of abiding underemployment. Most governments address the problem in a cursory manner: more with bluster, and blaming the unemployed for their predicament, than actually helping those that the market has set adrift.

In the US, even with public education and retraining opportunities, a significant proportion of the adult population is chronically underemployed or unemployed. This is an excellent recipe for crime and despair.