There’s a myth that in the 1950s, everyone was very loyal to companies and companies were very loyal to people. But we always had a contingent work force that could be laid off at any time. They were called women. ~ American economist Ann Huff Stevens

An old employment dynamic was invigorated in the 21st-century: temporary workers. Besides companies not bringing on full-time employees, the Internet facilitated connecting freelancers with consumers. The list of personal services provided on-the-fly has ballooned: everything from walking the dog to legal aid for being dogged by the law. 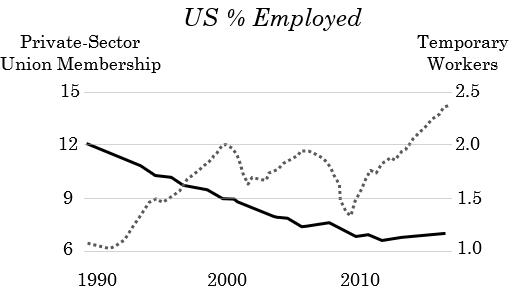 Precarious work is increasingly common and is expanding on a global scale, replacing what has long been regarded as standard employment. ~ Kevin Hewison

The majority of those with precarious employment would prefer steady work. An insure job makes it difficult to make commitments, such as buying a home, or even get married.

An explosively growing example is peer-to-peer ridesharing. The largest such company is Uber, which was founded in San Francisco in 2009. A mobile phone app made connecting Uber drivers with passengers easy. The company raked in $37 billion in revenues worldwide in 2017. Meantime, the average pay of drivers of ridesharing and delivery firms dropped 53% from 2013 to 2017 as more drivers entered the market.

In the wake of Uber and other ride-sharing firms, traditional cab companies have been hurt. The price of a New York City taxi medallion (the right to have a cab) dropped 20% from 2013 through 2017.