A long-standing way to cut costs is to employ the cheapest labor. Putting factories in foreign countries has been particularly pronounced in the US.

US manufacturing employment peaked during the 2nd World War. It has been downhill ever since. 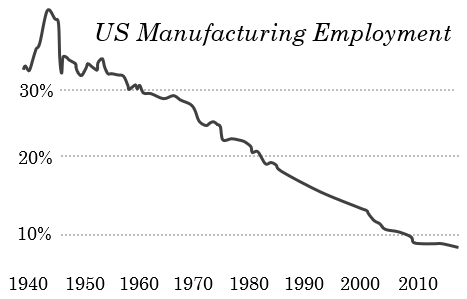 American multinationals started shipping jobs to neighboring Mexico in the early 1980s. Car makers were among the first. The practice quickly spread. Companies left their home turf and went shopping for suitable locations to invest. The trend to offshore production has accelerated in the 21st century.

American companies often save on costs by finding lower wages abroad, not by enhancing the abilities of American workers. ~ American economist Tyler Cowen

Overseas jobs have robbed millions of American workers of the means to make a comfortable living. Of the 3.9% fall in labor’s share of income in the US 1985–2010, 85% of the drop can be attributed to jobs lost overseas.

Companies once felt an obligation to support American workers, even when it wasn’t the best financial choice. That’s disappeared. Profits and efficiency have trumped generosity. ~ American economist Betsey Stevenson

From 2000 to 2009, American multinationals cut US employment by 2.9 million while expanding employment overseas by 2.4 million. Many of these transplanted factories produce products that are shipped directly back to the US, displacing goods that had been previously made domestically.

Apple is an example of why it’s so hard to create middle-class jobs in the US now. If it’s the pinnacle of capitalism, we should be worried. ~ American economist Jared Bernstein

Apple earns $400,000 in profit per employee: top rung in wringing lucre from its workers. It has done so by shipping jobs overseas whenever possible. 32% of Apple’s 63,000 employees are in foreign lands.

A much larger army of 700,000 contractors engineer and manufacture Apple products. None of them do so on US soil.

Weeks before the first iPhones were to come out, in 2007, they needed to be revamped: at the last minute, Steve Jobs demanded that the iPhone screen be glass, not plastic, which was easily scratched. (It is ridiculous that this had not been considered early on, but managers reflexively went with plastic because it was cheaper.) This material change necessitated an assembly-line overhaul.

New glass screens arrived at the factory outside Shanghai near midnight. A foreman immediately roused 8,000 workers from their beds in the company’s dormitories.

Each employee was given a biscuit and a cup of tea, then put to work on a 12-hour shift, fitting glass screens into beveled frames. Within 4 days, the plant was producing 10,000 iPhones daily.

The speed and flexibility is breathtaking. There’s no American plant that can match that. ~ Apple executive

Contract workers for Apple were working 12-hour shifts, 18 days in a row, despite repeated requests for a day off. Exhausted workers could not help falling asleep at their stations. In 2010, 14 overwhelmed Apple factory workers in China committed suicide.

Worker safety and well-being are our top priorities. We are aware of no other company doing as much as Apple to ensure fair and safe working conditions. ~ Apple corporate statement

The US has stopped producing people with the skills we need. ~ Apple executive

Industrial engineers have to oversee production work in factories. Apple claimed that the Chinese could readily meet manpower demands that the US could not, and at a much lower cost than imaginable using American workers.

The entire supply chain is in China now. ~ Apple executive

China is not just cheap. It’s a place where, because it’s an authoritarian government, you can marshal 100,000 people to work all night for you. ~ American economist Susan Helper

Apple is exemplary of large product companies across America and the western industrialized world. For the most part, only niche companies that have not reached sufficient size to manufacture overseas still make products domestically.

There are notable exceptions among international corporations. While it has assembly plants around the world for bikers in foreign countries, Harley-Davidson makes its American motorcycles in the United States.