Polynesians had landed their canoes on Easter Island by 900 ce. The 163.6 km2 island is at the southeast corner of the widespread cluster of islands now known as Polynesia.

Easter Island was politically annexed by Chile in 1888, which is over 3,500 kilometers away. By then it was a spent rock: its remaining natives having been raided by Peruvian slave traders, and further devastated by smallpox and tuberculosis brought by Europeans.

When first inhabited, Easter Island was a lush forest, with huge palm trees. Its soil was rich, the climate mild.

Easter Island is cool by Polynesian standards, and windy. Its rainfall averages only 127 cm: abundant by the standards of Mediterranean Europe or southern California, but well below the Polynesian norm.

The modest level of precipitation is compounded by the porous volcanic soil, which quickly absorbs rainfall. Freshwater is limited.

Unlike the rest of Polynesia, which is closer to the equator and dotted with coral reefs, Easter Island lacks seafood abundancy. With the haul from the sea constrained, Easter Islanders took to extracting the terrestrial resources.

Politically, the island split into a dozen clan territories, with the typical Polynesian tribalism of chiefs and commoners. What was unusual about Easter was that the clans were integrated religiously, and to some extent economically and politically. This owes to the island having an uneven distribution of valuable resources.

Rocks took on a special significance: stones make the soil moister by providing cover that reduces evaporative loss from the Sun and wind. Rocks dampen the diurnal fluctuations in temperature by absorbing heat during the day and releasing it at night. Rubble in the dirt protects against erosion. Stones also serve as slow-acting fertilizer, leaching their nurturing minerals into the soil year after year.

Lithic mulch agriculture was independently invented by farmers in several dry regions of the world. Easter Island was one of them. On Easter, besides strewing stones in the soil among crops, large boulders were stacked as windbreaks.

The advantage in bounty of rock gardening is enormous: anywhere from 4 to 50 times the yields that otherwise could be obtained. 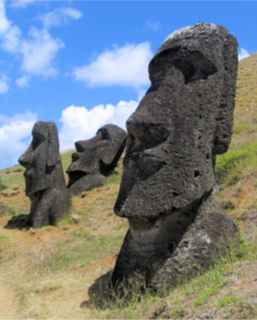 The clans competed peacefully by trying to outdo each other in building huge stone platforms (ahu) and statutes (moai): the mysterious monuments that made the island famous.

For 7 centuries, the population of Easter grew toward a summit of 30,000, as the natives inexorably consumed the island’s natural resources, both fauna and flora. By 1600 the island was completely deforested. Much of the interior was converted into rock gardens so as to grow crops.

Increasingly fierce competition morphed into war for the limited resources left. Clans turned on each other. Moai were toppled by rivals.

The collapse of Easter Island’s civilization was swift, occurring just after reaching a peak of population and environmental impact. By the time Captain Cook visited in 1774, the natives he met marveled at the wood in his ships: a substance no longer grown on the island.