In recent years, toxic and hazardous chemical pollution has caused many environmental disasters, cutting off drinking water supplies, and even leading to severe health and social problems such as ‘cancer villages’. ~ China’s Environment Ministry in 2013

There simply is no water in China safe to drink, save perhaps the most remote locations where no one lives. There are no waterways or wells that are not heavily polluted. Acid rain is common throughout much of China, and in India.

Water is the biggest environmental issue in China. In the cities, people see air pollution every day, but they don’t see how bad the water pollution is. ~ Chinese ecological economist Dabo Guan

With only 25% of the world average for water supply, China needed to well manage its waters to have enough. This is especially true in the north, which has only 20% of the supply in the south, but half of the Chinese people.

Most of the northern half of China is as dry as straw. Severe water stress is defined as having less than 1,000 meters3 of water per person per year. Beijing, China’s capital, has 100. The water table there has fallen 300 meters in 2 decades.

The south has plenty of water, the north much less. If possible, the north should borrow a little. ~ Mao Zedong in 1952

In 1958, the Chinese created a huge, all-purpose water reservoir at Danjiangkou in central China. 2/3rds of Beijing’s tap water supply now comes from Danjiangkou, traveling over 1,400 km: roughly the distance between New York City and Disney World in central Florida.

Danjiangkou is only one of many massive water diversion projects. Moving water to the thirsty northeast – especially the capital: Beijing – is nothing new. Chinese history is replete with jaw-dropping hydrological achievements.

The Chinese have done nothing resembling rational husbanding of its water resources. Instead, China has fouled what little water it has.

There’s nothing people can do. This is the government’s responsibility, because all the factories dump their wastewater. ~ Chinese factory worker Yao

All factories dump their wastewater without treatment, and government has done next-to-nothing about it. Even state-owned companies have no compunction about polluting the waterways and soils where they are situated.

Further, China exports its environmental practices when it invests. Chinese factories abroad unabashedly dump their untreated wastes as if they were at home.

At least 1/3rd of the length of the Yellow River that runs through northern China is too polluted for agricultural use: plants can’t stand it. 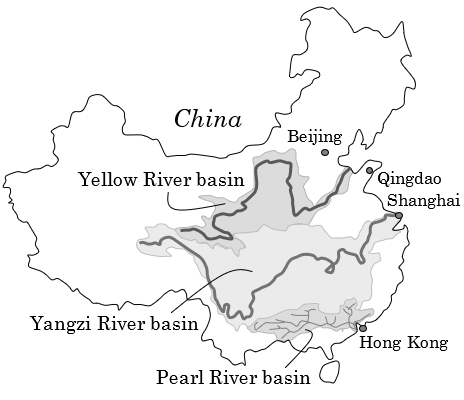 The Guanting water reservoir in Beijing was declared unsuitable for drinking in 1997. Now there are no others which supply urban areas that can be considered drinkable.

Only 20% of domestic wastewater is treated in China. The average in other advanced industrialized countries is 80%.

You can see dead pigs here every year, but there are more now than in the past few years. ~ Chinese man in 2013, commenting on the carcasses floating in a river near Shanghai

The taste of swine is mighty fine to the Chinese: 500 million pigs are slaughtered and consumed in China every year.

The mortality rate for industrial hog farming is ~3%. Roughly 15 million pig corpses need to be disposed of annually.

Hog farmers often pitch their dead pigs into rivers “for convenience,” one government official reluctantly admitted. This is in addition to the manure and other copious wastes that hog farms produce and are casually disposed of in waterways.

Over 16,000 hog carcasses were fished out of rivers that supply water to Shanghai in 2013. Throughout the floating pig parade, city officials insisted that Shanghai’s water was safe to drink.

Black-market dealers buy diseased or dead pigs and sell them at a discount to unsuspecting consumers. (In China, selling rat and fox meat as beef and mutton is business-as-usual. Peddling contaminated food is commonplace, as is food poisoning.) When the government cracks down on the trade, these swine swill in the drink instead of being served at the dinner table. (If the river is too far, putrid porcine corpses are simply dumped. In 2017, officials in Zhejiang province, in eastern China, discovered 300 tonnes of diseased pig carcasses barely buried.)

Groundwater provides 50–80% of the water supply in northern China, and 20% overall. The water drawn from Chinese wells is laden with toxins and is especially poisonous in the north.

China is by far the world’s largest producer and consumer of fertilizers and pesticides, which find their way into the water supply after contaminating the soil. The level of nitrogen pollution in China is unprecedented.

Though factories blithely do their best to degrade the environment, farmers pollute waterways more thoroughly than factory effluents.

Fertilizers and pesticides have played an important role in enhancing productivity, but in certain areas, improper use has had a grave impact on the environment. The fast development of livestock breeding and aquaculture has produced a lot of food but they are also major sources of pollution. ~ Chinese agricultural ministry spokesman Wang Yangliang

Thick algae blooms have become increasingly common during the summer months offshore China’s coastal cities, and in many of its lakes.

Lake Tai near Shanghai hosts toxic algal blooms during warm weather, thanks to the nasty blue-green algae that live there. Lake Tai is the country’s 3rd-largest lake and supplies drinking water to nearby cities.

Algal blooms follow from massive discharges of phosphates or nitrates into the water, whether from farming, untreated sewage, or industrial effluent. The carpet that algae blooms create dramatically change the environment below them, blocking sunlight and sucking oxygen from the water, suffocating marine life.

Qingdao is a major industrial center and seaport north of Shanghai, and home since 2007 to lush algal blooms weighing up to 20,000 tonnes. Sailing events in the 2008 Beijing Olympics were threatened by an algal bloom, which was kept in check only by employing a fleet of boats, helicopters, and an army of 10,000 to keep the waters clear.

The aquifers that supply groundwater wells are being depleted. Near coastal areas, seawater is drawn in as aquifers are drawn down, salting the water and making it undrinkable. Land in urban areas above these aquifers is sinking.

China has more problems with rivers ceasing to flow than anywhere else in the world. Even in wetter south China, the Yangtze and Pearl rivers often stop flowing during the dry season.

2/3rds of China’s 669 cities have water shortages, more than 40% of its rivers are severely polluted, 80% of its lakes suffer from eutrophication, and about 300 million rural residents lack access to safe drinking water. ~ Chinese American environmental scientists Jianguo Liu & Wu Yang in 2012