The release of greenhouse gases into the air and surface warming is only the most obvious aspect of the global warming gyre. The oceans soak up atmospheric heat: absorbing over 90% of the heat energy added to the world’s climate system. The oceans are the world’s largest natural carbon sink.

We thought that we got away with not a lot of warming in both the ocean and the atmosphere for the CO2 emitted. We were wrong. The planet warmed more than we thought. It was hidden from us just because we didn’t sample it right. But it was there, in the ocean already. ~ American geoscientist Laure Resplandy in 2018 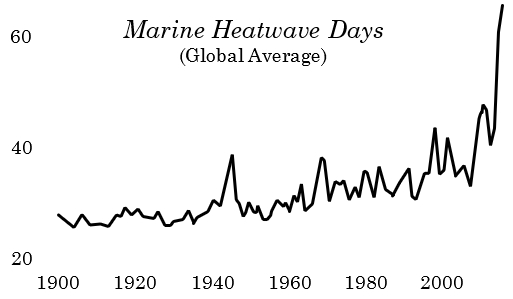 The thermal toll on the oceans is accelerating: Earth’s oceans absorbed heat in 2017 at twice the rate as 2000. Half of ocean heat uptake since 1865 has taken place since 1997.

Without humans, the natural carbon cycle would be balanced. Instead, oceans manage to absorb only 1/3rd of man-made CO2 emissions. Too much man, too little ocean.

Phytoplankton (aka microalgae) are the autotrophic members of the plankton community: those able to synthesize their own energy via photosynthesis. Almost all microalgae are microscopic, but they add up to be a huge factor in the oceans being livable. Marine phytoplankton account for nearly half of global primary productivity, thereby serving as the fundamental food source for heterotrophs in the food web. Phytoplankton also play essential roles in the global cycles of carbon, nitrogen, phosphorus, and other elements.

Phytoplankton have not been happy with the warmer water: migrating poleward for cool relief. Many struggle to adapt as quickly as the ocean is changing. A steady decline in phytoplankton numbers in the early 20th century accelerated mid-century. 1950–2010, global microalgae populations dropped 40%. The hotting up is especially affecting tropical plankton, decreasing their diversity as species go extinct.

A decrease in diversity is likely to have a strong impact on tropical ecosystems, because biodiversity loss is a major cause of ecosystem change. ~ marine ecologist Mridul Thomas

The brisk ocean warming is killing marine life at a rapid clip. Worldwide, populations of everything from phytoplankton to coral to whales are being decimated because of ocean heat and acidification.

There’s an intimate relationship between the amount of carbon stored in the ocean and what the climate is doing. ~ American Earth scientist Jesse Farmer

25% of the carbon dioxide pumped into the atmosphere ends up in the ocean. Through a series of chemical reactions, oceans acidify as they absorb CO2.

Since industrialization, the world’s oceans have become 30% more acidic. Marine pH continues its freefall. The oceans are now more acidic than they have been for over 2 million years. Many organisms cannot stand the rising astringency. Among other effects, fish lose their sense of smell, greatly reducing their ability to survive.