The Mekong River, natively known as the “mother of water,” flows down from the Himalayas, the mountain range that forms the top of the world. The Himalayas is one of the youngest mountain ranges, formed by the Indian subcontinent shuffling north and slamming into Eurasia. 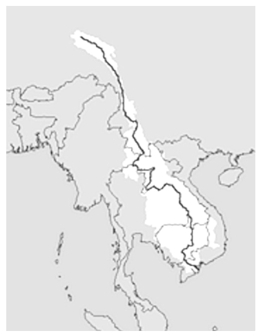 The Himalayas hold the Earth’s 3rd-largest hoard of ice and snow, after Antarctica and the Arctic. Many rivers flow from here, fed by snow melt off the mountains and heavily augmented by seasonal rainfall. 70% of the rivers’ waters eventually wash into the sea.

The Mekong River began to cut fast and deep into the Tibetan Plateau ~17 million years ago. Exceptionally warm climate and intense summer monsoon rains helped sink the river into the soil; a river carved by erosion rather than tectonic force.

Before reaching the South China Sea, the Mekong River disintegrates into a network of distributaries, forming a biologically diverse ecosystem. The Mekong Delta is a swampy forest, dominated in the south by flat flood plains.

Hominids settled in the Mekong Delta ~2 million years ago, readily fed by its richness. At the onset of the 20th century, the soil of the Mekong Delta was still fecund, and its waterways full of fish. The situation has dramatically changed.

The flow of the Mekong has been greatly diminished by a myriad of dams built along its course. Reaping hydroelectricity has hard hit the natural life which was once so abundant. The dams also strip the Mekong of essential sediment which naturally fertilizes vegetation downstream.

Drought now plagues southeast Asia. Crop yields of all kinds are down, including rice and coffee. Some of this owes to the Delta region becoming saltier: a condition abetted by the plethora of wells dug for fresh water. As the Delta dries, brine from the sea pushes up the water channels, spreading into surrounding land.

Pumping water from wells also causes subsidence. In 2015, the Delta was less than 2 meters above sea level. By 2050 it will be less than 1.

The efforts at intensive production will eventually fail in self-organized criticality. A once prodigiously fertile land will be abandoned as its waters no longer support the people that poisoned it. The depopulation will be a die-off.