CO2 is the principal gaseous determinant of Earth’s climate state. It essentially acts as the radiative “control knob” that sets global temperature. Contributing 63% toward aeriform global warming, carbon dioxide is by far the gas with the greatest greenhouse kick.

The rising level of atmospheric CO2 is a direct product of deforestation and life under industrialization, principally through the burning of fossil fuels. 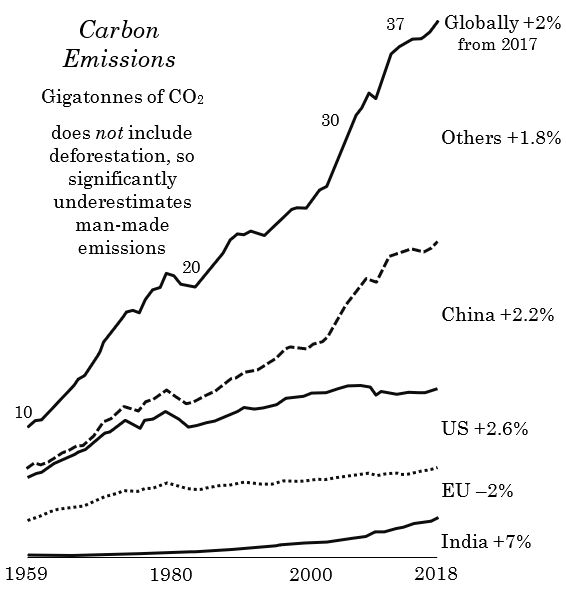 Clearing forests delivers a double shot of carbon dioxide. CO2 is released by the felling or burning. Moreover, the loss of vegetation removes a natural absorber (sink) of CO2.

The atmospheric carbon dioxide level in 1750, before industrialization, was 280 parts per million (ppm). By the end of World War 2 it had hit 300. The human world was emitting 6 billion tonnes of CO2 into the atmosphere annually.

The global level of atmospheric CO2 went over 400 ppm in 2013. The last time carbon dioxide levels were that high was 3 million years ago, when sea levels were 20 meters higher. In May 2019, global CO2 was at 415 ppm.

In 2017, humanity pumped 41 billion tonnes of CO2 into the air: over 600% more than the mid-20th century. And human injection of CO2 into the atmosphere continues to rise. Carbon emissions rose 2% in 2018 from the previous year.

The current rate of CO2 increase is over 100 times faster than in at least the last billion years, if ever in the planet’s history; a rate that will continue as long as worldwide fossil fuel consumption continues at its current level but is more likely to increase.

Once installed, CO2 persists in the air for a century. Humanity has already locked in accelerating global warming for the rest of its existence.

The Fruits of Civilization
Foreword
Technology