Methane is much more complicated once it gets into the atmosphere than carbon dioxide is. That’s because it reacts with a lot of different important chemicals. ~ American climatologist Drew Shindell 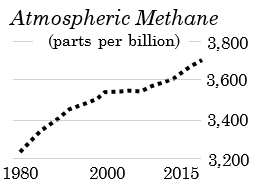 Via its promiscuous reactivity, methane (CH4) is 84 times more potent as a greenhouse gas than carbon dioxide (CO2); but there is over 200 times more CO2 in the atmosphere than CH4.

Methane has a relatively short lifetime in the atmosphere: 12 ±3 years. Nonetheless, methane musters 25% of the global greenhouse effect.

Short-lived greenhouse gases contribute to sea-level rise through thermal expansion over much longer time scales than their atmospheric lifetimes. Amazingly, a gas with a 10-year lifetime can actually cause enduring sea-level changes.

As heat goes into the ocean, it produces continued thermal expansion. Then the heat is transferred back to the atmosphere and emitted back into space to cool off. That’s a very slow process of hundreds of years. ~ Canadian geologist Kirsten Zickfield & American atmospheric chemist Susan Solomon

Methanogens make the marsh gas in wetlands, the bellow in cattle belches, and the flair of flatulence. Termites are little methane engines, thanks to their digestive archaea.

Though many methanogens live in the mud, soil is a net methane sink, which is precisely why the ancient dirt that comprises fossil fuels is so laden with methane.

The methanogens in the marshlands are excited about global warming. The hotter it gets, the happier they are.

The higher the temperature, the more efficient they are at producing methane. ~ English climatologist Paul Palmer

Wetland methane production is illustrative of feedback loops inherent in the climate system.

Natural gas has been touted as a relatively “clean” fossil fuel. It is anything but: natural gas is mostly methane, and the American natural gas industry has been careless about leaks. Over $4 billion in natural gas is leaked into American air annually. Much of it emanates from manufacturing ammonia fertilizer, which uses natural gas as a feedstock and fuel.

Man-made methane emissions are likely to be at least double the estimates used in climate models prior to 2018. Further, ethane and propane emissions, which are also potent greenhouse gases, are probably 3 times as extensive as figured. Ethane and propane are byproducts of natural gas and petroleum drilling and refining.

US oil and gas drilling have been the primary source for the rise of atmospheric ethane in recent years, reversing a trend. About 60% of the drop we saw in ethane levels over the past 40 years has already been made up in the past 5 years. If this continues, we are on track to the maximum ethane levels in the 1970s. ~ German atmospheric chemist Detlev Helmig in 2016

Livestock digestive tracts are well stocked with methanogens. The ruminants raised and consumed by humans have been responsible for 18% of the global warming since the machine age began: a greater contribution than all the traveling to-and-fro in fossil-fueled vehicles such as cars and planes.

One side effect of atmospheric methane is the production of ozone, which, near the ground, is another potent greenhouse gas. Whatever its surface-level malfeasance, in the stratosphere, ozone is a protector of inhabitants below. But, before heading into the ozone, a quick snort of laughing gas (nitrous oxide).