Evolution is a tightly coupled dance, with life and the material environment as partners. ~ James Lovelock

Climate is one aspect of an evolutionary planetary gyre, both as self-regulating and self-perpetuating via feedback loops. These dual dynamics are characteristic of systems subject to self-organized criticality, where a wicked 2nd derivative – too much change too quickly – causes a breakdown in the existing range of “normal.”

With the warming the world has already experienced, we can see very clearly that a difference of 0.5 °C really does matter. ~ Swiss climatologist Erich Fischer

The most important fact about climate is that it occurs as a trend. Average surface air temperature over the last billion years shows this. 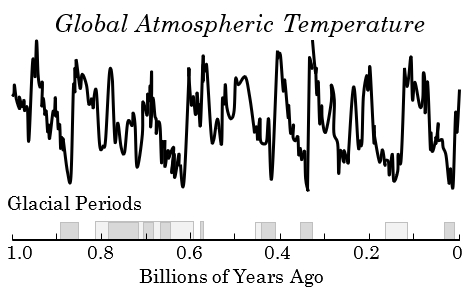 Perhaps the 2nd most important fact is not a fact at all. It is that little is known about the climate gyre; understandably so, because climate is a product of a planetary system of mind-boggling intricacy that operates on a time scale far longer than human experience.

At every point, as our knowledge increases, we’ve always discovered that the climate system is more sensitive than we thought it could be, not less. ~ American paleoceanographer Maureen Raymo

The threshold of hothouse Earth could be at a temperature rise of ~2.0 °C above preindustrial, locking in a continuing rapid pathway toward much hotter conditions. This pathway could not be reversed or substantially slowed. ~ American chemist Will Steffen et al in 2018

So much is happening at the same time and at a faster speed than we would have thought 20 years ago. We’re heading ever faster towards the edge of a cliff. ~ Swedish climatologist Garry Peterson in 2018

You don’t know how close to the cliff you are until it’s too late. ~ American ecologist Heather Lynch

Looking at the peaks and troughs of global temperature over the past billion years ushers the obvious question: what caused the turnaround? In most instances the answer is not known. Sometimes a cataclysmic event caused a climate reversal, but more often a shift in the climate gyre came from the self-regulating biosphere of Earth: what James Lovelock called Gaia.

The warmth of the Sun was 30% weaker when the planet began hosting life 4.1 billion years ago (BYA). But Earth did not freeze over.

Internal heat generation made for a liquid ocean that covered the planet. Water has a lower albedo than land. The early global ocean absorbed much more thermal energy from the Sun than today’s continents ever could.

Water vapor and clouds held the warmth in. It helped that the air had a substantially different composition.

Back then, CO2 was the predominant atmospheric gas. Cyanobacteria evolved photosynthesis 3.6 BYA to take advantage of the bounty: consuming carbon dioxide exhaling oxygen as a waste product. This gaseous exchange eventuated in conditions favorable for aerobic animals to arise 800 million years ago.

Trading atmospheric CO2 for O2 had its repercussions much earlier than the coming of critters. A modest oxidation triggered an explosive growth in mineral diversity on Earth. The so-called Great Oxidation Event began 2.45 bya, fostering 2,500 new minerals: over half of the 4,500 minerals now extant. These minerals were later instrumental in fostering terrestrial life.

The world iced over 2.4–2.1 BYA during the Huronian glaciation. It is the earliest-known glacial period. There were several others in the eons that followed, most notably 800–600 MYA: a time termed Snowball Earth, when Earth shivered through 4 of the most severe ice ages in its history.

Owing to variations in orbit around the Sun, Earth naturally cycles between glacial periods and warmer interglacial periods. A cyclic cooling period halted after the advent of agriculture. Carbon dioxide levels started to rise 7,000 years ago. Methane emissions began going up 5,000 years ago.

Keeping the planet balmy with a bit of agriculture was not a bad thing, given Earth’s tendency to chill. But the explosive exhaust of industrialization was something else altogether. Waste heat and gaseous egest, mostly from machines, produce prodigious amounts of greenhouse gases. Industrial-era warming commenced globally as early as the mid-19th century. It is no small irony that the combusted fuels generating emissions come from fossilized plants: long-dead benefactors suborned.

Historically, plants helped keep the world cool and well oxygenated. They will be sorely stressed by the rising heat, caught between the dilemmas of carbon starvation and hydraulic failure.

When conditions get hot and dry, plants conserve moisture by closing their stomata, which are the pores that let plants breathe: absorbing CO2 and cooling themselves via evaporation. Closing stomata means not taking in CO2. If that goes on too long, a plant starves from lack of carbon.

Even with stomata closed, plants still uncontrollably lose water when it’s hot. Hydraulic failure from lack of water poses as great a threat as carbon starvation.

Along with microbes and plants, humans have had an outsized effect on Earth’s evolution. One consequence has been to change the climate. Unlike microbes and plants, man-made pollutants have wrought a tipping point that has turned into an extinction event. Earth has not had a “cooler than average” month since December 1984.

The unnatural habitat of man is illustrated by cities. The only other animals (beside humans) are either inconspicuous, domesticated, caged, or considered pests. With the exception of designated “green spaces” that comprise a small fraction of urban land, the only plants are potted.

Even the temperature is affected. New York City is often 3 ºC warmer than nearby countryside.

Droughts and desertification are worse in some parts of the globe, while precipitation has intensified in others. These have already impacted food production: a trend that will worsen in a nonlinear way.

We are witnessing is major hydrologic change. There is a very distinctive pattern of the wet land areas of the world getting wetter, in the high latitudes and the tropics, and the dry areas in between getting drier. Within the dry areas are multiple hotspots resulting from groundwater depletion. ~ American hydrologist James Famiglietti in 2018

Climate change does not merely change weather patterns. It also changes the flow of weather itself.

By altering global air patterns like the jet stream, a warming planet can cause weather to become more stuck in place. Whether drought, downpour, heat or cold wave, a weather pattern tends to persist.

The current global warming rivals the Paleocene-Eocene Thermal Maximum (petm), which occurred 55 mya. During the petm, global air temperature warmed ~7 °C in 10,000 years. Warming now is even more extreme, both in temperature rise and pace. Earth’s thermal dynamics exhibit self-organized criticality in warming related to greenhouse gas release. A tipping point for acceleration was reached in 1940.

The gyre of climate change that has been experienced to date is only going to disruptively intensify. The largely temperate world that mankind enjoyed in its middle age is being replaced by a feedback of environmental hostility.

The most obvious effect of climate change appears on the thermometer. The weakening of the polar vortex spells colder winters in the northern hemisphere, at least for the next decade or so. But the dire thermal throttle is heat.

The wet-bulb temperature is how a temperature feels. Humidity makes a big difference. Muggy heat is more oppressive than dry.

Mammal bodies cool by sweating: sweat evaporates off the skin, wicking away excess heat. This evaporative cooling technique fails when the air is already moisturized. When cooling conks out, body core temperature rises beyond the narrow tolerable range, leading to lethargy, organ failure, and death.

Large swaths of the tropics, the Amazon, southern areas in the Mideast and Arabian Peninsula, northern India, the eastern US, and eastern China, will suffer increasingly severe humid heat waves in the years to come. The early death tolls will be highest in those areas with growing populations and scarce cooling infrastructure, notably coastal west Africa and northeast India.

By 2100, global surface air temperature average will have risen by at least 4 °C above the preindustrial level (at the beginning of the 19th century). Humankind won’t survive that.

We are in deep trouble with climate change. ~ United Nations Secretary General António Guterres in 2018

As of 2017, the climate models that best fit the current trend are those which show the fastest global warming, with surface temperature 4.5–5.0 °C above the preindustrial level by 2100. A 2018 study, focused on climate model shortcomings, indicates that current estimates underestimate global warming and its consequences by a wide margin.