Ships have always been the cheapest, fastest way to move cargo over long distances. Most of the world’s populations live in coastal areas, and on waterways, for this very reason. Shipping is the lifeblood of economic globalization. 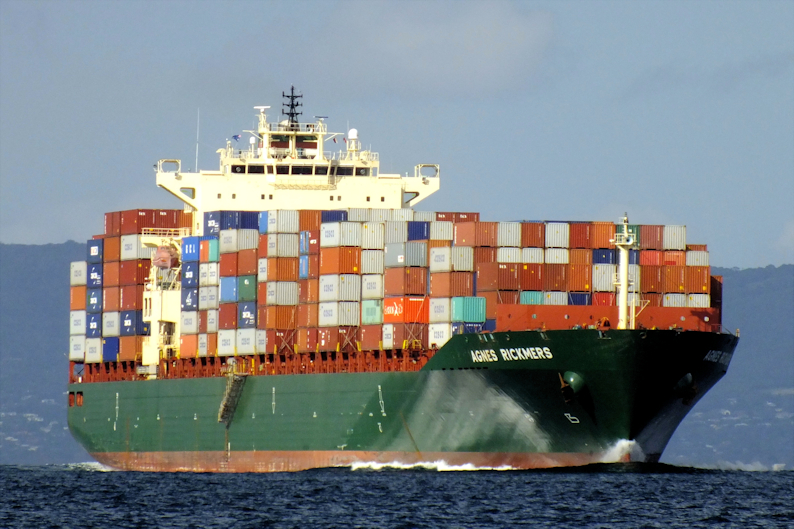 Over 60,000 colossal ships crisscross ocean trade routes, burning 2.2+ billion barrels of heavy fuel oil annually. Heavy fuel oil is the residue from crude oil refining. This filthy fuel emits 1,800 times more sulfur into the air than diesel engines. The 16 largest ocean ships produce as much sulfur pollution as the entire global fleet of cars. Heavy fuel oil is the stuff that no one on land is allowed to burn. Ships contribute ~2.5% of global greenhouse gas emissions.

Humans are changing the intensity of storm processes on Earth through the emission of particulates from combustion. ~ American atmospheric scientist Joel Thorton

Large marine mammals are regularly run over by trade ships. The noise of ocean vessels disrupts and shortens the lives of those sea creatures who are not more grievously abused.

The ballast water that ships carry and discharge at the next port of call does a wondrous job of transporting diverse zoos of biological specimens, including plants, animals, and a vast variety of microbes. Today’s cargo ships perform this function much more prodigiously than vessels in earlier ages. By dint of ferrying humans to-and-fro for extended periods, cruise ships do their cargo brethren one better in generating nasty bilge which is dumped in the seas.

The Exxon Valdez was an oil tanker which plowed into Alaska on 24 March 1989 and spilled its guts in the surrounding waters, killing over 400,000 seabirds, ~1,000 sea otters, millions of fish, and laying a thick layer of oil which suffocated and otherwise fouled life below. This spectacular blunder was simply the blazing billboard of the fact that oil spills of all sizes are a regular feature of ocean shipping.