75% of California’s precipitation falls in the northern part of the state: much of it winter snow in the Sierra Nevada mountains. 75% of the water consumed is in central and southern California; so, the Californian economy relies upon an extensive system of tunnels, pipelines, aqueducts, and pumping stations to porter the water south. Without this transport, the Central Valley would be a grassland rather than one of the world’s most productive agricultural regions, and southern California would be too parched to populate. 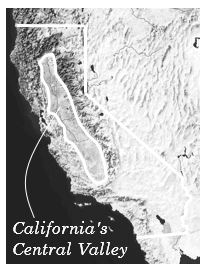 California’s Central Valley comprises 13.7% of the state’s land mass. Covering less than 1% of the country’s cropland, the Central Valley grows 8% of the nation’s food, worth $43.5 billion in 2013.

This productivity depends upon massive irrigation from both surface water diversions and groundwater wells. 17% of the irrigated land in the US is in the Central Valley.

Almonds illustrate. Expanding California almond production 2007–2014 consumed 9,300 hectares of Nature, most of it wetlands, and led to an annual 27% increase in irrigation demand.

Over a half century of intensive agriculture has heavily contaminated the groundwater with fertilizers, pesticides, and animal wastes. This befoulment has been topped off by fracking, which irredeemably pollutes water over a wide area, as fracking pollution is a deep injection of chemical toxicity.

7 million people live in the Central Valley (2018). There is no tap water there that is safe to drink.