Plastic is indispensable for many applications, including surgical gloves and condoms, and in packaging foods to keep them fresh longer, thereby reducing food waste. Plastic is also eminently disposable.

After a short first-use cycle, 95% of plastic packaging is lost to the economy. ~ World Economic Forum

In 1955, Life magazine celebrated the dawn of “throwaway living,” thanks to disposable plastics. In 2015, 406 million tonnes of plastic were produced globally. 36% of it was used once or twice and then thrown away. 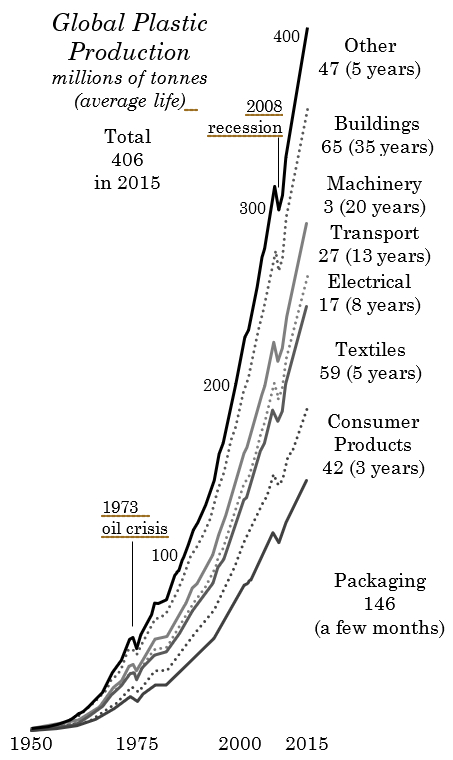 13 million tonnes of plastic refuse went into the world’s oceans in 2015. At that disposal rate, marine plastic will outweigh fish by 2050. But this projection is a gross understatement. Plastic production is expected to double between 2015 and 2035.

Plastics are similar to DDT in the sense that they were previously not perceived as a major pollutant. ~ Canadian marine biologist Boris Worm

Corals are animals just like me and you: they become wounded and then infected. Plastics are ideal vessels for microorganisms, with pits and pores, so it’s like cutting yourself with a really dirty knife. ~ American marine biologist Joleah Lamb

Once a coral is infected, the disease usually spreads across the colony.

If a piece of plastic happens to entangle on a coral it has a pretty bad chance of survival. ~ Joleah Lamb

A single application of a product with microplastics can release 100,000 of these miniscule beads. Harmless they are not.

Contaminants like these microbeads are not something our wastewater treatment plants were built to handle, and the overall amount of contamination is huge. The microbeads are very durable. ~ American ecologist David Smith

Most marine plastic comes from East Asia, where waste-collection systems are flawed or nonexistent. 10 rivers – 2 in Africa and 8 in Asia – discharge 90% of the plastic debris that winds up at sea. The Yangtze River in China alone delivers 1.5 million tonnes to the ocean annually.

In Indonesia, rivers and canals are clogged with plastic debris. In Bandung, Indonesia’s 3rd-largest city, the government sent in the army in 2018 to help fight the overwhelming mountains of garbage.

What I am fighting now is rubbish. It is our biggest enemy. ~ Indonesian army commander Sergeant Sugito

60% of the plastic produced is less dense than seawater. Wind-driven upper ocean currents act as gyres to distribute and concentrate buoyant seaborne plastic. There are 5 major ocean gyres on Earth at the present time.

Several huge plastic garbage deposits have formed throughout the world’s oceans, where plastic permeates the entire ocean depth in considerable concentration. The Great Pacific garbage patch  in the northern Pacific Ocean is exemplary. This plasticized vortex is mostly comprised, volume-wise, of small bits (microplastics). By weight, nearly half of the plastic comes from discarded fishing nets, which readily snag sea life. 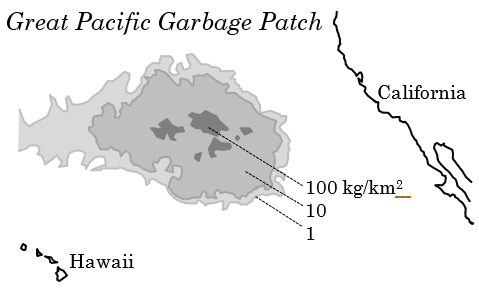 The most hazardous marine plastics are the small bits that float near the surface, where they are eaten by fish, dolphins, whales, turtles, and seabirds. Over half of the world’s sea turtles and cetaceans have consumed plastic. Many have died from it.

In April 2019, a young pregnant sperm whale washed up on a beach of Italy. Inside were over 1,000 assorted pieces of plastic weighing 22 kilos. A month earlier a beached whale in the Philippines died with 40 kilos of plastic inside. Such deaths by indigestion are a regular event.

The consumption of plastic by sea creatures is not inadvertent. Marine-seasoned plastics produce a dimethyl sulfide signature that has an appealing scent. Plastic smells like food.

The threat of plastic pollution is global, pervasive, and increasing. Concentrations reach 580,000 pieces per km2 and production is increasing exponentially. Plastics ingestion will reach 99% of all seabird species by 2050. ~ Australian marine and atmospheric researcher Chris Wilcox et al in 2015

Filter-feeding sea life are severely impacted by the tiny plastic particulates which foul their digestive system. If not fatal in of itself, reproductivity is decimated. Oysters are exemplary.

2/3rds of the seafood Americans eat has plastic in it. A 2016 study concluded that seafood consumers are ingesting up to 11,000 bits of plastic a year, to unknown health effects.

1/3rd of all plastic waste ends up in soils or freshwater. Most of it disintegrates in tiny particles. Terrestrial microplastic pollution is much higher than marine fouling by a factor of 4 to 23, depending on the environment.

Sewage factors heavily in the distribution of microplastics. ~85% of the particulate matter in sewage, such as from garment fibers, persists in the sludge, which is often applied to crop fields as fertilizer. Hence, much microplastic ends up in soils. Plastic residues alter the health of soil by fouling the organisms that live there. Earthworms burrow differently when soil is plasticized, affecting worms’ fitness and thereby soil quality.

Plastic fibers are found in tap water around the world. At least 83% of the world’s drinking water is plasticized. The US has the highest contamination rate: 94%. (10,000 tonnes of plastic are dumped in the Great Lakes every year. The Great Lakes and related rivers provide much of the drinking water supply for the region. This is emblematic of America.) The lowest contamination rates are the UK, Germany, and France, at 72%.

Plastics enter our body and can stay there for quite a while. ~ Belgian environmental biologist Colin Janssen

Plastic undergoes physical and chemical transformations as it breaks down, increasing toxicity. A few compounds in plastic which leach out, such as BPA, disrupt the hormone systems of both vertebrates and invertebrates. The long-term health effects are not well understood, but indications are that microplastic pollution is debilitating if not outright lethal. Inflammation seems to be the least of it.

Detectable levels of BPA are in the urine of 95% of American adults. ~ environmental scientists Emily North & Rolf Halden in 2013

Polyethylene, which is the most produced and discarded synthetic polymer globally, is the most prolific emitter of greenhouse gases. ~ Canadian biological oceanographer Sarah-Jeanne Royer et al

Plastic debris is everywhere. It has spread across the planet, including accumulating in the Arctic.

The inhospitable nature of the island, together with its remoteness and inaccessibility, has so far effectively ensured a near-pristine island ecosystem. ~ United Nations in 1988, declaring Henderson Island a “world heritage site”

Henderson Island is a 37.3 km2 volcanic tip in the south Pacific Ocean, located between Peru and New Zealand. With poor soil and little fresh water, the island has been uninhabited since the late 15th century.

Despite lacking people, Henderson Island had acquired 38 million pieces of plastic garbage on its beaches by 2017. 3,500 bits of refuse wash up there daily.

The isolation of remote islands has, until recently, afforded protection from most human activities. However, society’s increasing desire for plastic products has resulted in plastic becoming ubiquitous in the marine environment, where it persists for decades. ~ Australian marine ecologist Jennifer Lavers & English marine ecologist Alexander Bond

Tiny pieces of plastic break off larger items, becoming microplastic that litters the air, eventually landing somewhere. On average, on every square meter, 37 microplastic pieces rain down on Earth’s surface each day.

Some plastic can withstand 450 years in the ocean before disintegrating; even longer in freshwater or in the soil.

Despite its long-lived hazards, plastic is a minor player in dirtying the terrestrial environment. Just 10% of the 3.6 million tonnes of solid waste discarded each day in the world is plastic.