An abyssal 11 km deep, the Mariana Trench is the deepest crevice in the world’s oceans. At 10 km, the 2nd-deepest ocean gash is the Kermadec Trench. Both are at the seams of subducting tectonic plates in the Pacific Ocean.

We still think of the deep ocean as being this remote and pristine realm, safe from human impact, but this could not be further from the truth. We found extraordinary levels of pollutants there. It really brings home the long-term, devastating impact that mankind is having on the planet. ~ English marine ecologist Alan Jamieson

In 2016, persistent organic pollutants from products manufactured from the 1930s until banned in the 1970s were found in the tissues of crustaceans living in these trenches. The pollutants made their way into the deep from contaminated debris and dead animals sinking into the abyss. 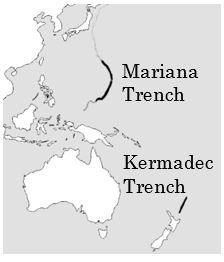 The trenches are many miles away from any industrial source and suggests that the delivery of these pollutants occurs over long distances despite regulation since the 1970s. ~ Australian marine ecologist Katherine Dafforn

The deep sea encompasses the largest ecosystems on Earth. We need to wake up and start really realising that we are having a huge effect. ~ English marine ecologist Andrew Sweetman

Pollution is taking its toll on deep sea life. The creatures that live there are also being pummeled by climate change, notably ocean warming, anoxia, and acidification.

By 2100, bathyal depths (200–3,000 meters) are likely to be 4 ºC warmer. Abyssal depth (3,000–6,000) could warm by 1 ºC. The warming will lower oxygen concentrations, with bathyal oxygen levels falling up to 3.7%. Even small changes can invoke significant impacts, disrupting fragile ecosystems that live on the fringes of anoxic regions.

Rising CO2 spells acidification that will prove disastrous for sea life with shells. Fish and other creatures will also be affected.

Organic matter in the deep ocean is also expected to drop dramatically, reducing a food supply that is already scarce. Food on the deep-ocean floor could fall by 55% or more by 2100, starving the animals and microbes there.

The dynamic is made more dire by deep-sea mining and drilling for fossil fuels. Many of the spots targeted for resource extraction lie in areas most impacted by climate change.

The rate of change is so dramatic that we run the risk of severely disrupting the deep ocean – which covers most of the planet’s surface. ~ Andrew Sweetman