Humans are adding ignitions to the landscape in areas and seasons when natural ignitions are sparse. ~ American geographer John Abatzoglou

In 2015, over 1.3 million fires were reported in the United States, causing 3,280 deaths, 15,700 injuries, and $14.3 billion in property damage. Fewer than 5% of these were forest wildfires, which by far burned the most land, though resulted in a small fraction of the property damage compared to urban and suburban fires.

While the number of fires has decreased in recent decades, the trend has been toward more extensive conflagrations. Human-caused climate change is responsible for doubling the land burned in western US wildfires during the last 40 years (1979–2018), where the majority of America’s remaining forests are.

Wildfires dramatically alter the vitality of the land. A soil exposed by fire may become easily erodible, so much so that the erosion rate may double. Otherwise, fire can cause a soil surface to harden, instead of gently percolating underground, rainwater and melting snow rush over the stiffened surface, gaining enough force to erode loose sediments. 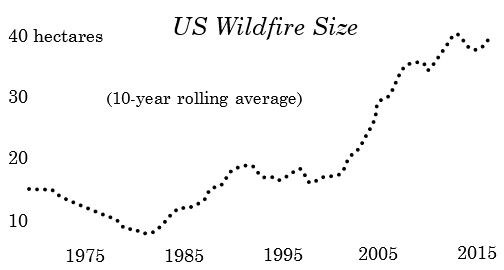 The sediment can have a wide range of effects on watersheds, many of which are headwater streams and important for water supply. ~ American geologist Joel Sankey

Fire pollution poses an increasing threat to ecosystem productivity in a warming world. The pollutants released by wildfires impact plants in areas way beyond the boundaries of the disaster. ~ English chemist Nadine Unger