Elephants love reunions. They recognize one another after years and years of separation and greet each other with wild, boisterous joy. ~ American educator Jennifer Richard Jacobson 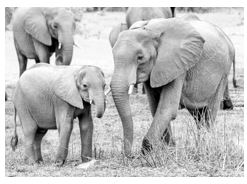 Elephants are highly intelligent, compassionate animals. Their groups are matriarchal: a more sensible choice in leadership than humanity makes.

The tusks of elephants are prized for their ivory: a substance esteemed since antiquity by many human cultures. Elephants were eliminated in Syria and North Africa for ivory in ancient times. That demand continues to drive elephants toward extinction.

Elephants that survive a slaughter are psychologically scarred for the rest of their lives. Survivors do their best to regroup, often joining with others, so as to have social support. The loss of experienced leadership is sorely missed by elephants.

At the turn of the 20th century, the world elephant population was 1.4 million, and fairly stable. Their numbers started to drop around World War 1. The decline accelerated steadily until the 1980s, when the combined effects of automatic weapons, ivory poaching, and human habitat encroachment wiped out half of the remaining elephants.

The Asian elephant population was 200,000 in 1900. Fewer than 40,000 were alive as of 2009. Indian farmers, who decimate the elephants’ forests, consider pachyderms an oversized pest. The feeling is mutual.

African elephants, which have long had higher population numbers than their Asian cousins, will soon be gone from the wild: reduced to miserable numbers living in zoos.

Forest elephants are integral to a functioning forest in Africa, opening up the forest floor and acting as a vital part of the life cycle of many plant species through their role as seed dispersers. Certain tree species decline as a result of the local extinction of forest elephants. ~ English zoologist Bethan Morgan

In January 2012, a hundred raiders on horseback charged into an African national park and slaughtered hundreds of elephants: entire families, including females and the infants they strove to protect. Then some killers paused to pray to Allāh.

They were good shots, very good shots. They even shot the babies. Why? It was like they came here to destroy everything. ~ Congolese park ranger Paul Onyango

Tens of thousands of elephants are killed each year in Africa. The prize comes in male tusks, but the carnage is not constrained: whole herds are indiscriminately wiped out.

The customers for blood ivory are the religious and superstitious in the far East. Though almost all international ivory trade is legally banned, many tonnes are smuggled from Africa to east Asia each year.

In the Philippines, devout Catholics treasure their religious icons carved from ivory. One Filipino ivory collector remarked: “I don’t see the elephant. I see the Lord.” Pope John Paul II blessed an ivory artifact from the country’s largest archdiocese.

China is the largest consumer of ivory. There too, Buddhist monks bless ivory icons, as ivory honors God. “When elephants die, they want to leave something behind as a good deed to have a good next life,” observes one Chinese ivory carver.

The international authorities charged with stamping out illegal ivory smuggling are as inept as ivory consumers are covetous. For its part, the Chinese government expels those trying to police the ivory trade.

China is the epicenter. Without the demand from China, this would all but dry up. ~ American diplomat Robert Hormats