The climate consequences are catastrophic. We are headed for disaster, and nobody seems to be able to slow things down. ~ American Earth scientist Rob Jackson in 2019

Government pledges to forestall worsening climate change are nothing but deception. The 2015 UN-sponsored Paris Agreement is a toothless joke. Serious efforts to mitigate greenhouse gas emissions would require wrenching economic changes that no nation intends to effect. 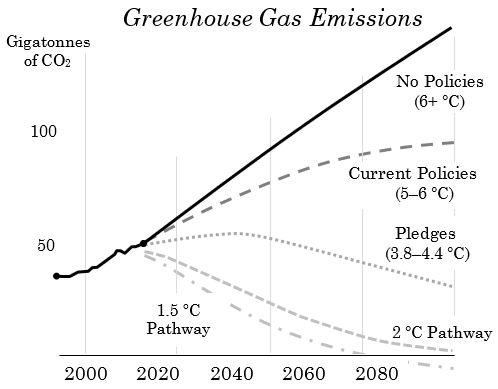 Economic vitality remains tied to energy output. Worldwide, economic activity was up in 2018. As a correlate, global energy demand surged 2.3%. Fossil fuels, especially coal burning, remain the primary source of energy production: an inexorable situation for decades to come. As economic vivacity is the primary goal of governments worldwide, the priority is clear, as is the outcome.

There have been proposals for treating the pollution that instigated climate change as if it was a problem amenable to solution. Suggestions take 2 vectors: economic and technological.

A popular proposal has been to create an artificial market for air pollution, specifically carbon emissions. The inherent irony is rich: trying to fix what the free market created with its own medicine; like the “hair of the dog” treatment of imbibing more booze to cure a hangover.

The idea of applying market mechanics to climate change is analogous to sending the fox to guard the henhouse. Trading permits to pollute has been done for 2 decades, and even touted as a success, but the climate change dilemma remains essentially untouched.

A related tack is taxing emissions to curb them: so far, no good. Nor is there is any reasonable expectation that such would even approach curing the ill intended on a global scale.

An altogether different approach is to attempt to cure global warming with technical countermeasures: somehow suck greenhouse gases out of the atmosphere.

However seemingly sensible or harebrained the many geoengineering schemes proposed seem to create a global air freshener, none yet have been tried on a scale that could possibly be telling. That’s a good thing, as the risk of malfunction is so significant. Nothing that people do of any consequence is without unforeseen externalities. Collectively, people are nowhere near as bright as they like to think they are.

Faith in technology is foolery. There is no technical fix to the accumulation of human presence on Earth. The damage has been done, and there is no redress. The evil genie of man’s wantonness cannot be put back.

Earth was at the tipping point for a major mass extinction event in 1940. Pontificators warning to “act before it’s too late” are babbling bunk. It is already far too late. That point is driven home by the fact that nearly 20% of deaths worldwide are caused by pollution.

For decades, pollution and its harmful effects on people’s health, the environment, and the planet have been neglected by governments. Yet, pollution is the largest environmental cause of disease and death in the world today. ~ The Lancet Commission on pollution and health, in 2017