Until the age of machines most of humanity labored in agriculture. In 1850, half of the British and American populations worked the land. The number of people involved in farming only declined as it became more automated.

Agricultural production doubled 4 times between 1820 and 1975: during 1820–1920, 1920–1950, 1950–1965, and again 1965–1975. Most of the increased production owed to more land under cultivation and more intensive practices. From 1700 from 2000, global pastureland increased 680% and cropland by 560%. At the end of the 20th century, agriculture coveted 1/3rd of the world’s vegetated area. Agricultural productivity increase otherwise owed to improved cultivars, and to slathering synthetic chemicals onto crops, especially after the 2nd World War.

Until the 19th century, farms were dependent upon composts and manures for fertilizer. In China and Japan, farms near cities used the ‘night soil’ collected by efficient cleaning organizations. In the 1820s, the input that allowed the first boost in agricultural productivity was the importation into Europe of guano (bat droppings) from huge deposits off the Pacific coast of Latin America.

The first departure from natural fertilizer came in 1842, when English farmer John Lawes applied sulfuric acid to phosphate rock and produced the first artificial fertilizer. With scant supply of suitable rock, Europeans imported from Florida, Morocco, and Thailand. The Soviet Union used slave labor from their gulags on the Kola peninsula. The Australians wrecked the landscapes of Nauru and Ocean Island for phosphate rock.

German chemist Fritz Haber devised an artificial process to obtain usable nitrogen based upon ammonia synthesis in 1909, which was then developed by 1913 on an industrial scale by German chemist Carl Bosch. But it was not until the 2nd half of the 20th century that artificial nitrogen fertilizer became widespread, owing to the considerable energy required to produce it.

Most of the fertilizer was wasted: at least half of it simply ran off the soil into water courses, where it wrecked environmental havoc. That did not deter its application. Fertilizer use rose 10-fold in western Europe 1910–2000 while crop production only doubled.

Better living through chemistry proved a chimera. The short-lived productivity boon of the Green Revolution was spent as its ersatz alchemy exhausted the soil.

The situation for food production now is far from sanguine. Some 40% of Earth’s land surface is already given over to agriculture, and that figure continues to rise. The system to feed humanity emits 1/3rd of man-made greenhouse gases.

Expansion of land area used for agriculture is a leading cause of biodiversity loss and greenhouse gas emissions, particularly in the tropics. ~ English zoologist Ben Phalan et al 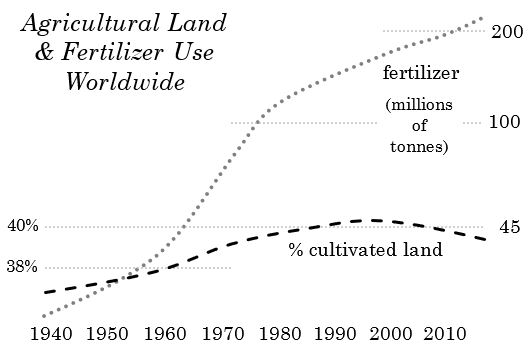 In the US, over 70% of the land is devoted to agriculture and commercial forestry. 800,000 hectares are lost every year to erosion and other soil degradation. 400,000 hectares annually are taken for human habitation, highways, and industry.

Historically, the best farmlands were foreclosed by cities and roads; a universal truism, as the flattest acreage with a good water supply is the first choice for land development.

Japan is exemplary. A mountainous island chain with only 6% of its land arable, Tokyo and surrounding cities sprawl over the Kantō plain, once the country’s most fertile soil, along with the Osaka Plain, home to the cities of Kyoto and Osaka.

Most of the best lands are already cultivated. How can we continue to produce food from the land while preventing negative environmental consequences, such as deforestation, water pollution, and soil erosion? ~ Indian agricultural geographer Navin Ramankutty