The first duty of the agriculturalist must always be to understand that he is a part of Nature and cannot escape from his environment. He must therefore obey Nature’s rules. ~ Albert Howard

A significant fraction of the temporary productivity gains in agriculture during the Green Revolution are attributed to the pesticide use.

It is astonishing we have learned so little. After Silent Spring revealed the unfortunate side-effects of those chemicals, there was a big backlash. But we seem to have gone back to exactly what we were doing in the 1950s. It is just history repeating itself. The pervasive nature of these chemicals mean they are found everywhere now. ~ English ecologist Dave Goulson

2.7 million tonnes of pesticides are applied worldwide every year. The US sprays 22% of the pesticides: 600 tonnes, an average of 1 kg per hectare of arable land.

Despite heavy dosing, the US does not use pesticides as intensely as some other countries. Japan smears 5.9 kg of pesticides per hectare on its crops; China 4.7 kg; Italy 2.5 kg; and 1.3 kg per hectare in the British Isles.

Besides grotesque overapplication, pesticides are not very effective. At best, only 1% reach their intended target.

Not using pesticides reduces crop yields by only ~10%; even less if crops are planted with vegetative buffers (polyculture) to give ravenous insects something else to eat and help disguise the food hoard so as not to blatantly advertise and attract the little buggers in the first place. But that sort of smart farming is practiced practically nowhere. Instead, monocropping is ubiquitous.

Further, the meager positive power of pesticides has waned. From 1950 to 2000, despite increasing pesticide use by 800%, US crop losses from insects nearly doubled: from 7% to 13% of the total harvest.

There is a chance for an immunity to manifest itself in increasing degree as the insects become acclimatized. ~ American entomologist A.L. Melander in 1914

Evolved resistance to insecticides and herbicides has been known for well over a century. The chemists who concoct killer compounds only care that their creations destroy the intended targets without being lethal to humans in the applied doses. All else is incidental. 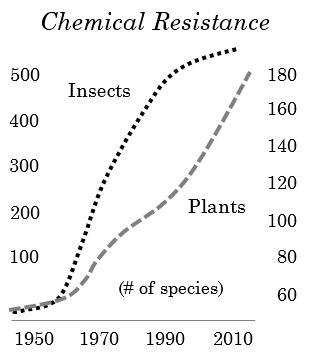 It is not a matter of if but when we are going to lose chemical control of weeds. ~ American botanist Adam Davis

Ultimately, pesticides affect all members of an ecosystem, from the tiniest invertebrates to humans and other large animals living at the top of their food chains. ~ American pesticide maven Monica Moore