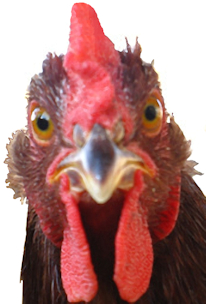 The common chicken is a subspecies of the Red Junglefowl, which was domesticated 5,000 years ago in Asia, then taken around the world for its eggs and meat.

Chickens are no dumb chicks. Their communication skills are on par with primates. Fowl employ sophisticated sounds and gestures to convey their intentions.

Sociality necessitates considerable intelligence. Chickens are gregarious. Roosters and hens have their own social hierarchies: the proverbial pecking order.

A chicken takes account of its experiences and knowledge in making a decision. Chickens can solve complex problems. They empathize with individuals in danger, indicating theory of mind (understanding that others have minds which are different than their own).

95% of all laying hens in the US live packed in small cages, stacked several tiers high in long rows, inside huge windowless buildings. They are afforded no natural behaviors. Unlike their wily wild cousins, industrial chickens are typically zombified.

To avoid chickens caged together from pecking each other, their beaks are cut off or burned. To prevent disease epidemics amid the squalor that are industrial chicken pens, antibiotics are pumped into the chickens.

Chickens have a natural lifespan of over a decade. Industrial (egg) laying hens are exhausted by the time they are 2 years old. Spent hens are slaughtered.

In the 1940s, the US government ran a series of competitions for farmers to breed the “Chicken of Tomorrow.” The aim was to produce “one bird chunky enough for the whole family – chicken with breast meat so thick you could carve it into steaks, with drumsticks that contain a minimum of bone buried in layers of juicy dark meat.”

The University of Arkansas poultry science department reported that if people grew like industrial chickens, “we’d weight 349 pounds by our 2nd birthday.”

From beginning to end, the entire process is filled with pain and suffering. ~ US Humane Society on industrial chicken life

On the disassembly line to their demise, live broilers are hung upside down via shackled legs. Their heads are dipped in electrified water to stun them before their throats are slit.

Electric stunning has been found to be ineffective in consistently inducing unconsciousness. ~ US Humane Society

There are no American federal rules for the humane treatment of animals. Ignorant chicken eaters don’t care. They just want cheap meat.

To compensate for the unsanitary conditions on US poultry farms, American chicken meat is washed in chlorine. The European Union banned the importation of this tainted meat in 1997.