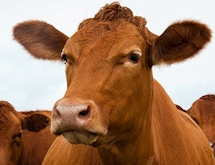 Cattle are one of the oldest forms of wealth, and their rustling one the earliest forms of larceny.

Cattle are classified as a single species in the genus Bos, with 3 subspecies which may interbreed. Hybridization with closely related species is also possible, though not with more distantly related bovines, such as the Asian water buffalo or American buffalo.

Cattle are kept for their meat and milk; exclusively so in the Americas. In the aftermath, their hides render leather.

In the East, cattle are principally employed as draft animals; meat and milk are secondary.

Cattle are not in the intellectual league of pigs or poultry, but they are not the dumb animals commonly presumed. Cows are quite gregarious and possess multi-dimensional personalities. Strong-willed individuals, cattle are good judges of character: of other cows, and of people.

When at liberty, cattle form intense friendships. Cows talk among themselves, invent games, babysit, forecast the weather, and know how to open closed gates.

Even short-term isolation is extremely stressful to a cow. Temperament and level of stress affect milk yield and meat quality.

Unlike other industrial livestock, cattle are sometimes allowed to graze on open land, particularly when farmers are attempting to raise quality milk or meat. More often, cattle experience the industrial norm: living in filthy, overcrowded sheds or lots.

For a dairy cow to continually produce milk, she must be repeatedly impregnated. (Like other mammals, cows only lactate for offspring.) A newborn calf is taken from its mother so that the mother’s milk can be sold. If the calf is a male, he is sent to a veal farm to suffer an excruciating, abbreviated life. A female calf is the nothing more than the next generation of milk machine.

Constantly giving birth takes its toll. A cow might naturally live to 20 years, but one in the dairy business only lasts around 4 years. Once a cow is considered “spent,” it is sent to slaughter, where it is transformed into ground beef.