There was a time when the countless tribes of men, though wide-dispersed, oppressed the surface of the deep-bosomed Earth. ~ 7th-century-BCE Greek poet Stasinos

Setting aside for the moment the environmental havoc humans are so prone to, or the pollution they so effusively spew, their very existence in such large herds disbursed all over the Earth alone would have had a profound impact on the entire planet, even if their sense of “environmentalism” had been impeccable.

In a Malthusian manner, the herds were long kept in relative check by limits on agricultural productivity. This did not keep observant men from presciently fretting over human breeding proclivity.

The strongest witness is the vast population of the Earth to which we are a burden, and she scarcely can provide for our needs. ~ Tertullian, in the 3rd century

The dam to Malthusian population explosion broke by accumulative technological advance. World population mushroomed from under 700 million in 1700 to 7 billion in 2011. 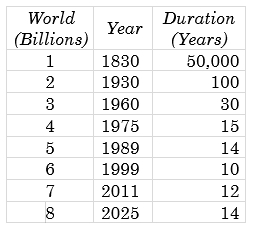 Improving living conditions and sanitation contributed to longer life expectancy, and greatly reduced youth mortality. Using nutrition as an indicator, the health of the world’s population is nowhere near what it could be, considering its overall wealth and the general education level. 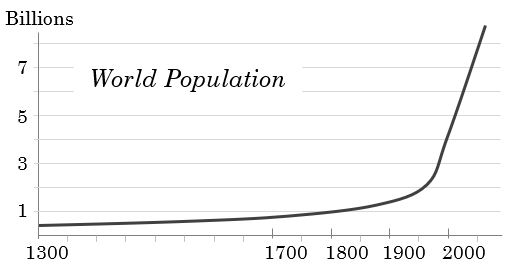 In the 20th century, besides wars, the brutal Soviet regime under Joseph Stalin suppressed population growth by killing 20 million of its citizens. Of all the major industrialized nations, Russia’s population has been the slowest growing. Stalin is long in the grave, but his successors have only been marginally better in creating conditions for a contented citizenry.

A burgeoning population is good for economic growth and signifies in political minds the potential for expanding power. Hence, governments generally encourage breeding by their citizenry through various incentives, especially tax breaks. A notable exception has been China.